Pramila Jaypal Cooks Paneer Tikka In Honor Of Kamala Harris And Posts A Picture. This Is Another Of Those Naan Bread Moments 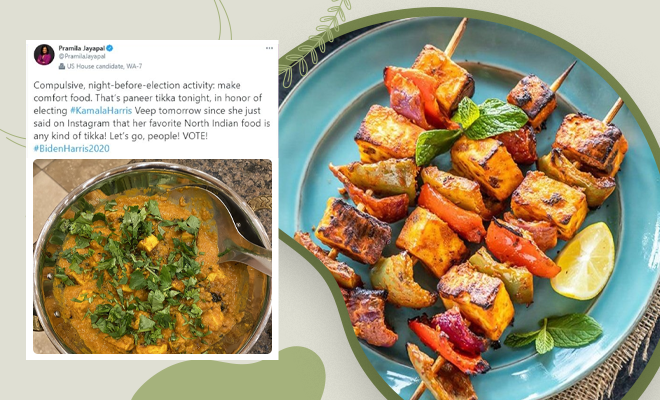 I am not a chef, a fact that my mother would attest to, but I would like to think that when it comes to food, I know quite a lot. Not so much as to how it is cooked, unless it’s 2 am in the night and maggi is what we’re talking about, but enough about how it should taste or even look like for that matter. For instance, I wouldn’t know how it’s made from scratch, but what I do know is that galouti Kebab should crumble in your mouth at the first bite. Similarly, I may be a little lost on the recipe of paneer tikka, but what I know for sure is that it is served after being gently charred and smoked in a tandoor. A little something that netizens were quick to point out, when Pramila Jaypal, US Congresswoman, shared a picture of the famous Indian appetizer.

The first Indian-American woman to serve in the US House of Representatives, Pramila Jaypal recently got trolled on Twitter, after one of her tweets showing off Indian food was picked up and torn apart on a basic technicality that she got wrong.

Taking to her twitter a night before the big election day, Pramila Jaypal thought of doing some cooking and decided to cook comfort food, in honour of the Democratic Vice Presidential Nominee, Kamala Harris. She posted a picture of what is a dish full of gravy/curry and captioned it saying, “Compulsive, night-before-election activity: make comfort food. That’s paneer tikka tonight, in honor of electing #KamalaHarris Veep tomorrow since she just said on Instagram that her favorite North Indian food is any kind of tikka!”

Also Read : #Trending: Just How Desi Could US Vice President Nominee Kamala Harris Be? Twitter Tries To Guess With #YoKamalaSoIndian

This is not how a Paneer Tikka looks like.

Sorry, but that is not paneer tikka by any stretch of the imagination. It's a malai paneer, at best or a paneer tikka masala.

This Paneer Tikka is as bad as your understanding of the #JammuAndKashmir issue.
Any self respecting North Indian will rather fast than eat this abomination. It will require a trip to the nearest gastroentrologist.
Please caption your pic with : Not for the faint hearted.

While some people went ahead and commended Jaypal of her effort and the sweet gesture, the rest of us who knew better how paneer tikka actually looks, were left rather confused. And some, even irate. Netizens clearly feel very strongly about paneer tikka as they were there as soon as it was posted.

The dish that most of us are guilty of knocking back every few days is actually an appetizer of sorts that is always served dry with mint chutney and onions. While what she had cooked, looked pretty much like a gravy dish, ready for main course.

But then we can’t really blame them. This is the country where naan, a perfectly complete name in itself is called naan bread and tea is called chai tea. So…

Also Read : US Vice Presidential Candidate Kamala Harris Advises Women To “Eat No For Breakfast”. This Meal Has Our Vote!