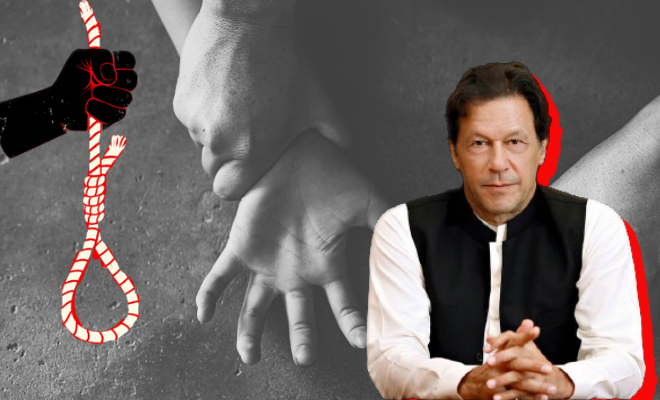 Pakistani PM Imran Khan Calls For The Public Hanging And Chemical Castration Of Rapists After The Gruesome Highway Rape.

Early this year, when Nirbhaya’s rapists were executed there was a sense of justice that prevailed. After a long and convoluted trial, Jyoti Singh’s memory could finally rest in peace. It was a massive triumph. However, when I was reading about the execution there was a small voice in my head that said even a death penalty was not punishment enough for what they had done.  Compared to how Nirbhaya was raped and murdered, it was not enough. And this is a thought shared, surprisingly for us, by a man and a PM no less. Pakistani Prime Minister Imran Khan believes this too. And he wants the chemical castration of rapists.

Which brings me to my question- what degree of punishment is enough for rapists? It’s not up to us to decide but humour me. I would say they should be publicly stoned to death and then burned at the stake. Of course, I know that we live in a democracy governed by strict laws and not in the middle ages. But when it comes to men who have raped a woman, we’ve all thought about ways we can do some serious damage, haven’t we?

That’s what I think. This is what Pakistani PM Imran Khan said on Monday that he wants to see the chemical castration of convicted rapists or that they be publicly executed. Well, we won’t say no to that.

Imran Khan was reacting to a question about the gruesome rape that took place near Lahore just last week. A mother with her two kids was driving home at night when she ran out of fuel on a highway near Lahore. While she waited for help to arrive, two men attacked her. They dragged her to a nearby deserted field and raped her in front of her children. This brutal incident sparked nationwide protests and calls for the resignation of officials.

Even though the police wasted a lot of time blaming the victim for being out so late and driving along a dangerous route, it seems like they finally found time and arrested one of the two accused. Officials say they have a positive DNA match and that they are still looking for the second suspect.

Imran Khan said he wanted the perpetrators to be hung publicly but he was informed that such an act would damage Pakistan’s relations with the EU. You see, in 2014 Pakistan was granted EU’s Generalized System of Preferences (GSP-plus) status. However, this was dependent on the observations of international conventions, such as human rights. And hence, the public hanging of rapists is not possible of the country.

Also Read: In Pakistan, Two Men Raped A Woman In Front Of Her Children. The Police Say She Chose The Wrong Route. Because Why Hold Men Responsible?

"Khan said he believed the culprits should be hanged publicly" – but officials warned such an act cld "endanger a preferential trade status given to Pakistan by the European Union." Also not a good way to go if Pak wants an extradition treaty with Britain. https://t.co/tvu3PnP8wT

However, the Pakistani PM said they were also looking into the viability of another option- chemical castration. He said in an interview, “The way there is first degree, second degree, third-degree murder, this [rape] should be graded in the same way, and when there is first degree [rape], castrate them. Operate on them and make them unable to do this.”

Chemical castration of rapists is something we have all thought of at some point or another. But then again, does that solve the problem of rapidly rising cases? When a society is based on oppression and systemically objectifying women, castration is probably works as a detriment but largely, the crime won’t stop. Misogyny and treating women as dispensable or the ones to show your power to is so ingrained, that a punishment will barely move the needle. Pakistan is one of the most unsafe countries for women in the world. Their rape statistics are through the roof. So even they do manage to chemically castrate the culprits of this rape, it would be a short term solution.

What happened with that woman on that highway was horrifying and sickening and it stands to reason that the whole nation wants some reform. And there should be. But chemically castrating the rapists , however tempting as that is, does not solve the main problem.

Pakistan PM Imran Khan Blamed Bollywood And Mobile Phone For Sexual Crimes In His Country. What Is He High On?