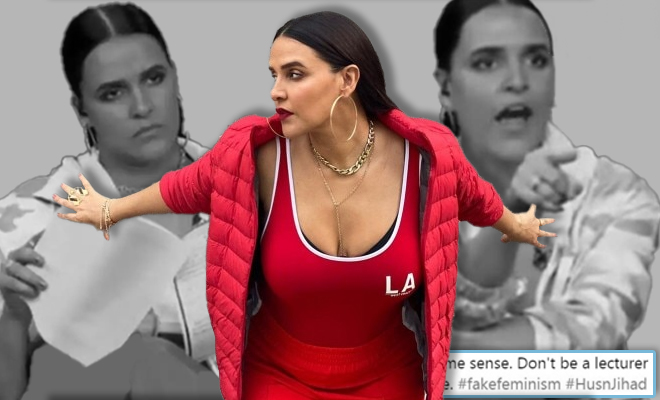 Neha Dhupia Is Such A Trooper. She Took Her Roadies Trolls Head On With Her Anniversary Post And We Think That’s Sassy

The first time I realised what I want in my future partner(s) was when I was dating this guy in college. See, the thing is he had most of the qualities I didn’t want, so by process of elimination I made a mental list. I know it sounds silly, but it’s a tried and tested efficient way to stay away from all the bad crops in the field. And everyone knows, that is the biggest task of all.

I am looking for someone who is funny, charming, eloquent, sensitive, not overly possessive, smells mouth-watering and most of all has a great sense of style (it might sound shallow but it’s very important). The guy needs to understand the concept of equality and needs to have the ability to handle all my nonsensical tantrums without saying shit like, “are you PMSing?”. When I find someone, who checks most these boxes, I will know he’s the one. I know what you’re thinking, ‘She’s going to die single.’

But sometimes, you do get lucky. Like Neha Dhupia and Angad Bedi are. On their anniversary, Neha took to social media to wish Angad but it was such a cheeky wish.

Recently, the actress was trolled for saying that a woman should be allowed more than one boyfriend and the words she used ‘it’s her choice’ became immortal on social media. She got trolled heavily for it but she took it in her stride. And with this anniversary post, we know she has a sense of humour. She said her husband is like 5 boyfriends in one and that it’s her choice. We love the sass in this.

Also Read: Neha Dhupia’s Vacay Style Is Proof That You Can Pack Light And Yet Look Like A Hot Beach Goddess!

Happy anniversary my love … to two years of togetherness 💕… "Angad is like 1. The love of my life 2. a suport system 3. a great father,4. My best friend and 5. The most annoying roommate ever. It's like I have 5 bfs in one…it's my choice." #thosewhoknowknow @Imangadbedi pic.twitter.com/dmlZFW0IZ0

She shared some pictures of her and Angad and accompanied them with this message. She said, “Happy anniversary my love … to two years of togetherness … “Angad is like 1. The love of my life 2. a support system 3. a great father,4. My best friend and 5. The most annoying roommate ever. It’s like I have 5 bfs in one…it’s my choice.”

While it is adorable, it also takes on trolls head on. Neha shared the same pictures of Instagram as well where Angad was quick to reply. He commented, “I love you always @nehadhupia happy anniversary gallan khat teh kaloollan jaada.”

The couple tied the knot in 2018 at a hush-hush wedding at a gurudwara in Delhi and have a daughter, Mehr together. Neha and Angad are one of my favourite celebrity couples for they are so low-key and adorable together.

I can only wish my future bae, wherever he is, reads this and takes notes from Angad. Those will come in handy for him.

Neha Dhupia Wore THIS Designer For Her Secret Wedding