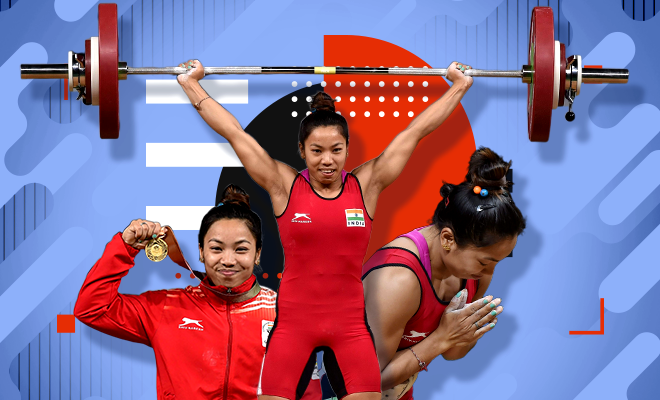 Mirabai Chanu Breaks Her Own National Record To Win Gold. Is There Something She Can’t Pull Off?

I have immense respect and admiration of people who are able to not just make it big in the field of interest but also beat their own score. All I manage to break is crockery at home. Nobody is born with the skills they need to reach where they are. It’s through hard work, discipline and an undying sense of passion towards what they love that they leap forward. Mirabai Chanu, an iconic Indian weightlifter is one such woman who has defeated her own score, time and again. Commonwealth Games gold-medallist Mirabai Chanu created a new record for herself in the National Weightlifting Championships, by lifting a total of 203kg, that’s 2kg more than she was able to lift last time, to win the 49kg gold.

In the 2019 World Championships, she set a national record of 201 kgs (and became the first female Indian weightlifter to cross the 200-mark) but couldn’t win a medal because she finished fourth.  However, she was able to pull a bronze at the Asian Championships. Her list of achievements is an extensive one. In fact, she has scored the 8th spot in the Olympic qualifiers list and is also currently working hard for the Tokyo Games in 2020.

Mirabai Chanu had suffered a lower back injury and was on a break for four months due to it. But she has made a comeback and a sharp one at that. “Every day before going to bed and before the start of my training, I look at the figure. I know it will not be possible for me to cross the 200 kg her own personal weight bar in the forthcoming Asian Championship. So I have set it for the Tokyo Olympics 2020. Looking at the figure every day I feel motivated,” Chanu told The Bridge.

She has been awarded Padma Shri and Rajiv Gandhi Khel Ratna in just 12 years of her weightlifting career. Chanu started her journey back in 2007 but came to the forefront during the trials of Rio Olympics 2016 weightlifting where she surpassed the national record of Kunjarana Devi, a veteran athlete, and her role model.

ALSO READ: Rani Rampal Became The First Hockey Player To Win The World Games Athlete Of The Year Award And We’re So Proud

Mirabai Chanu is inspiring to say the least. She makes us believe that no matter what, you can achieve your targets with hard work. And also that the most important thing is to compete with yourself, breaking your own records before even doing it with others.

ALSO READ: P V Sindhu Makes It To The Forbes List Of Highest Paid Female Athletes And She’s The Only Indian On It