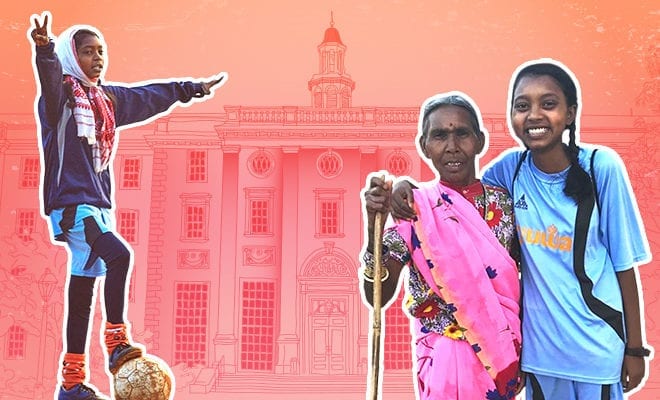 Meet Seema, A Girl From A Small Village In Jharkhand Who Got A Full Scholarship To Harvard University. We Are So Proud!

No matter how much we talk about gender equality, it won’t matter until Indians successfully change their mindset and perspective about girls. It’s honestly baffling how in so many parts of our country, even today, girls are seen as a burden and married off before they even hit puberty. They aren’t educated. They aren’t allowed to work. They have to dedicate their lives to serving their husbands and his family. Yay patriarchy! It’s honestly sad and pathetic that most people don’t understand that girls can do wonders if they are just given a chance. Look at this girl from Jharkhand, for instance. With the help of an NGO, she got a full scholarship to Harvard University. This girl is an inspiration.

Hailing from a village named Ormanjhi in Jharkhand, Seema, with the help of YUWA, an NGO working towards the well-being of girls in Jharkhand, has made the whole country proud by securing a scholarship to Harvard University, one of the most esteemed universities in the world. She also got accepted to Ashoka University, Middlebury College, and Trinity College.

Seema’s parents were never educated. They depend on sustenance farming for a living. Her father also works in a thread factory. Seema will be the first girl in her family to attend a university. But her journey has not been easy. In fact, it was riddled with obstacles. YUWA posted about Seema’s feat on Instagram. The post read, “ After joining a Yuwa football team in 2012, Seema has avoided child marriage, defended her right to an education and played football for years despite being ridiculed for wearing shorts.” Further adding, “Defying all odds, Seema has won a place at Harvard during this extremely competitive year.”

Also Read: Meet Kavita Bhondwe, A Differently-Abled Woman Who Is The Sarpanch Of Two Villages. She Is An Inspiration

Seema, talking about what she wants to achieve in the future said, “Gender equality is a development that I want to see in my village and the whole world. Bringing gender equality to my community is essential to reduce injustices against women like gender discrimination, domestic violence, child marriage etc. It would not only show economic growth but also social, where women take part in decision making at each house.”

Further adding, “I plan to start an organization for women in my village. This program would have two goals. One to start a small business that would train women to be financially independent. The other is to educate women about their rights and to build a bigger network to support women by providing essential vocational skills and knowledge.”

We love everything about this. Seema has made our entire country proud. Getting into Harvard University is no small feat. She is proof that every girl needs to be educated and be given equal opportunities. Even celebrities like Priyanka Chopra and Navya Naveli tweeted about Seema’s amazing achievement. Hopefully, more girls will follow in Seema’s footsteps.

More power to her. We can’t wait to see what she does next!

This Woman Rows 18km Across The Narmada River To Help Tribal Children And Pregnant Women. She Is An Inspiration