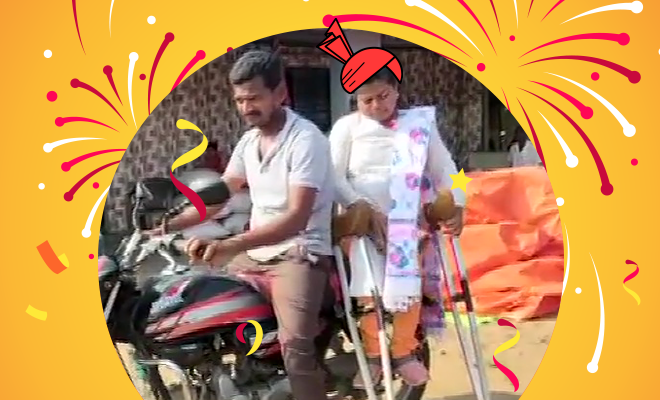 Meet Kavita Bhondwe, A Differently-Abled Woman Who Is The Sarpanch Of Two Villages. She Is An Inspiration

Most women in India have been undermined and harshly judged. People have this ridiculous notion that women aren’t suited for leadership or power positions. However, every day there are women out there who working hard to prove those people wrong. Like this 34-year-old woman who, despite being different-abled, is the sarpanch of two villages. How amazing is this?

34-year-old Kavita Bhondwe did not let her disability stop her from reaching her dreams. She is now in her second term as sarpanch of two villages in Dindori Taluka, Nashik district. During her 9-year tenure, Kavita ensured that the residents of these villages had roads, toilets, drinking water supply, and houses for the poor. She has also made significant changes in the Gram Panchyat office, stood up to illegal practices and established two women’s self-help groups in both Dahegaon and Waglud villages.

Maharashtra: A 34-year-old specially-abled woman is serving the society as Sarpanch of 2 villages in Dindori Taluka, Nashik district.

Currently in her 2nd term, Kavita Bhondwe made changes in Gram Panchayats' affairs & stood up against illegal practices in Dahegaon & Waglud. pic.twitter.com/OlwZD6kGWU

Also Read: This Woman Rows 18km Across The Narmada River To Help Tribal Children And Pregnant Women. She Is An Inspiration

Kavita became the sarpanch when she was 25-years-old. She says that to become the sarpanch she had to overcome societal pressures and prejudices against her disability. She told ANI, “Since I was physically challenged, people use to make fun of me. They said if I can’t take care of myself how would I be able to take care of the village. I was not paying attention to them. My family always supported me. My brother and father used to drop me at the office and pick me up. Many did not like the fact that I became Sarpanch at the young age of 25 years.”

This woman is an inspiration! She positively impacted the lives of these villagers so much that she was unanimously elected for the second term. I wish more women step up and take control of positions like sarpanch.

#Inspiration: Basanti Behan Is A Powerful Woman Who Has Been Working To Stop Child Marriages And Has Single-Handedly Kept A River Flowing. We Need More People Like Her

GET HAUTERFLY IN YOUR INBOX!
Related ItemsFeaturedTrendingMaharashtraSarpanchdifferently abled woman is the sarpanch of two villages in Maharashtrawoman sarpanch