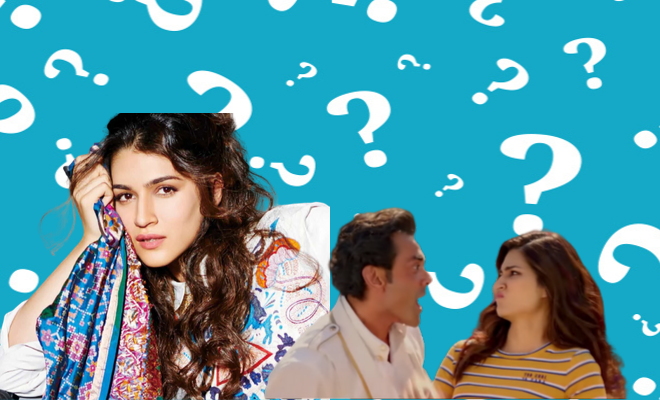 Kriti Sanon Defends Ek Chumma Saying The Men Are Demanding Kisses From Their Partners, Not Strangers. Acha, So This Is Okay?

You know, until a few weeks ago if someone would say that Bollywood plotlines and songs have massively sexist undertones, I would have nodded so hard, my neck would need a brace. Then again, things are changing so I would tell them that in the 90’s that was the case because that was the era of heroes. Not anymore! Now our industry has progressed and finally understood what to say and what not to say. But I should have shut up. Because after listening to Housefull 4’s latest song Ek Chumma, my confidence is wavering a little. The name itself is suggestive and we don’t know why we are tolerating this kind of thing anymore, when is Bollywood going to learn? Anyway, that is old news, what is pissing us off right now is Kriti Sanon, one of the stars of Housefull 4 is defending it and she’s not even doing a good job of it.

In a recent interview with Mid Day, Kriti Sanon was asked about the song Ek Chumma having sexist and misogynistic undertones. To which she replied “How is it regressive? The boys are saying [those lines] to their partner, not to a stranger. If Ek Chumma was disrespectful towards women, I would have spoken up.” Allow me to give you a little context here, the lines in question here are, “Gundo se chhuraya hai, maine tujhe bachaya hai/Haan pooch le saamne janta hai, Ek chumma toh banta hai.” (I have saved you from goons, ask the people in front, I deserve a kiss for that) What I gather from that is, just because a guy saves you from thugs, you must kiss him? Correct me if I’m wrong but partner or stranger, how is that not sexist? Kriti, please look up the word “regressive.” This song celebrates all the things that we are trying very hard to move on from. So yes, demanding a kiss even from your partner for saving and stealing her is regressive. Also, no one owes you a fucking kiss because you saved her from goons.

She goes on to say that, “In Tareefan, why was it not pointed that male models were being treated the way mainstream treats female models? In Coca Cola, I was asked why the girl was being put down [through the lyrics]. But my character too was saying the same lines to the guy. How is it okay for a guy to be teased, but there’s so much talk when a girl is being teased?” I mean, come on, if you are saying in that same interview that you are glad there is an ongoing dialogue about gender equality maybe learn the definition of gender equality? No one is saying that it is perfectly okay for a guy to be teased we are saying that nobody needs to be teased to make a good song. Maybe Ek Chumma would not be such a cringeworthy song if the lyrics and actions were less derogatory and more inclusive of the changes Bollywood is trying so hard to make.

If you haven’t watched the video please do, only then will you be able to perfectly understand the point we are trying to make here. But you might also want to stab yourself in the eye and the ear, and maybe alternatively, both. There is a scene in the video where on the pretext of being conservative Akshay Kumar is seen pulling up the strap of Pooja Hegde’s off-shoulder top only to have Pooja pull is back down. In another scene, the three men are seen forcefully kissing their “partners” only to be rewarded with a slap. I don’t know what is going on here, but I didn’t stick around long enough to find out.  And what is worse is Kriti’s justification for these actions.

Furthermore, she was asked if has ever changed the tone of a song or a scene to ensure it was not offensive. To which Kriti replied saying, “There is a lot of second-guessing because I want to be responsible. I don’t want the wrong message to go out through a scene or the movie [as a whole]. Anything we do or say can be taken out of context and blown out of proportion. But we don’t want to hurt anyone.” Okay then.

I won’t deny, the last few years we have seen a major shift in mainstream Bollywood. Movies finally started taking the woman’s voice into account, the derogatory dialogues and lyrics toned down and thanks to the wave of the #Metoo movement and we are thankful because that’s how it should be. But every now and then, the old Bollywood peeks out through some movie or in this case a song and we are really starting to get sick of it.  At some point though, we understand, old habits die hard and change takes time. But what we don’t understand and will not condone is an actress justifying a derogatory and so clearly sexist song just because she is in it. Let’s snap out of it now, shall we?

The Launch Of Housefull 4 Saw The Stars Looking Like They Belonged To The Sets Of Padmaavat. Here’s Why