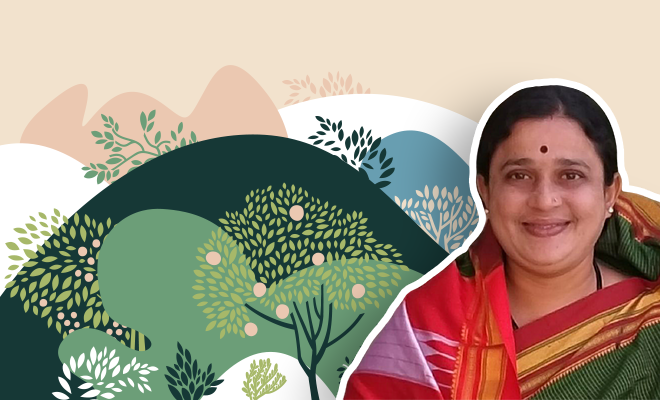 Some might know the phrase ‘turning tables’ as a famous song by British singer Adele, but what I know it as, is one of the strongest suits of women, who when greatly motivated or incentivised, can turn any situation to their advantage and how. A realisation we dawned upon coming across the ever impressive life story of Kavita Mishra, who at one point refused a lucrative job from Infosys, only to emerge as a big and successful cultivator years later.

Started as a story of a woman in India usually does – with oppression, where in after marriage she was forced to pass along a job offer from the company Infosys, at her husband’s behest. She shared that her husband Umashankar and his family was into cultivation, and so he gifted his wife 8 acres of the 43 acres of land he owned, to do the same.

No matter her primary interest was in pursuing a career in software programming, she decided not to be disheartened by the will of her husband and family, and took the challenging circumstances in her stride. Starting by selling off her jewellery to convert the barren land into fertile, she started her 11 year long journey till she achieved success.

Computer Engineer turned sandalwood cultivator, Kavita Umashankar Mishra showcases how lucrative farming can be when done right. Speaking in the #CauveryCalling training event at Mysuru today, her advice to farmers is, “Don’t do free farming, earn money for everything you plant.” pic.twitter.com/WwooZkiwvB

She shared, “I cleaned the land myself, and thought I would do some cultivation, but didn’t have much hope. With the money I received from selling my gold, I learned about the process of starting cultivation with the help of a few experts in the state. I learned the lay of the land and started growing fruits.”

Starting from pomegranate, she started earning a good enough profit until she moved on to sandalwood while expanding. She said, “In our plot, we have only two inches of water in our borewell, so we can’t cultivate traditional crops such as paddy or ragi, as they need more water. During monsoon, trees hold rainwater, which is used for four months, and for the remaining eight, we use our bore water. I believe that mother earth won’t leave our hand, even if our family members leave us. I have trust in her, and she still helps me in all ways possible in cultivation.”

Finally, this woman Kavita Mishra of Raichur district has become a role modal to the farmers of the State in taking up sandalwood cultivation, a report.@XpressBengaluru https://t.co/Ufwj77wKaZ

As of now, Kavita Mishra has almost 8000 fruit bearing trees on her land, all of which she has carefully nurtured and made profitable. The trees range from Mango, Guava, Custard Apple, Amla, Sweet Lime, Lemon, Coconut, Drumstick, and Jamun, including almost 800 trees of Teakwood.

Speaking of profits she said, “We get Rs 20-30 Lakh per month. Fruit trees generate a monthly and yearly income. The forest trees (like Teak) are ‘fixed deposits’ for our retirement. We sell our farm products by putting up a stall for 10-15 days on the Hyderabad-Goa road. and one is put up in front of the farm.”

Also Read : This Woman Takes A Bite Out Of Her Husband’s Packed Lunch Everyday. The Reason Will Melt Your Heart