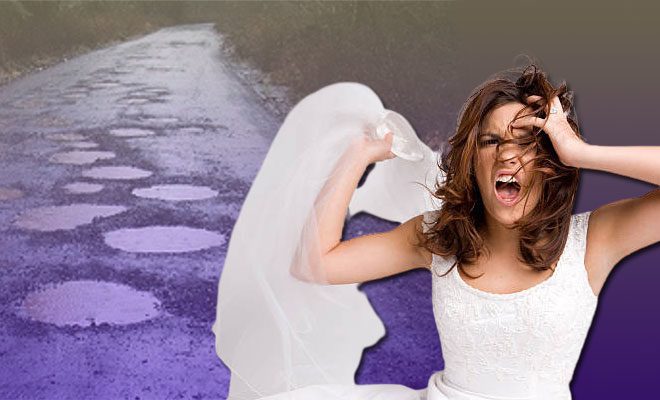 As Mumbaikars, we often joke about how there are more potholes on the roads than the road itself. But this joke stems from the reality of Mumbai. And it is not just Mumbai, most of the country is facing the issue of potholes and bad roads, especially the rural areas. Rural areas that have bad roads face the most issues, for instance, they lose their connectivity with other towns. Losing connectivity gives rise to a lot of problems for the villagers—their business gets affected, they cannot send their kids to school/colleges, they have no access to medical facilities, etc. But one of the rare points that a woman from Karnataka pointed out in her letter to the CMO about bad roads was that people are remaining unmarried!

Recently, a 26-year-old woman, Bindu who is a school teacher, wrote a letter to the CMO regarding the bad roads in H Rampura in Davangere and blamed the roads for people in her village remaining unmarried. Her letter to Chief Minister Basavaraj Bommai included a list of problems that people were facing due to bad roads.

Also Read: In Karnataka, A Muslim Family Sponsored A Hindu Girl’s Wedding And Also Helped Her Family Through A Financial Crisis

Bindu wrote, “Our village does not have good connectivity. It is still backward. Many of us don’t get offers of marriage because outsiders think that children won’t be able to get an education here due to lack of proper roads.” Her letter got the attention of the Chief Minister’s Office (CMO).

According to India Today, the officials in CMO have taken up the responsibility to resolve the issues of bad roads in the village at the earliest. Even MR Siddappa, panchayat development officer, Mayakonda also spoke on the matter and said, “We have already spent Rs 1-2 lakh for the development of this road but it is not enough. We need Rs 50 lakh to Rs 1 crore for tarring the road. We have requested the government and local MLA to sanction this amount.”

Also Read: In Karnataka, Poor Brahmin Brides To Get Rs. 25,000 For Marriage, 3 Lakhs For Marrying A Priest

In all honesty, as random as that reason might sound, it is a very valid reason. Bad roads are an existing issue that prevails in all parts of the country. And an issue that needs immediate attention. But more often than not these issues are neglected by the government and it is of utmost importance that attention needs to be brought to it.

Man Writes Love Messages For His Girlfriend On The Main Road Of Their Village For 2.5 Km