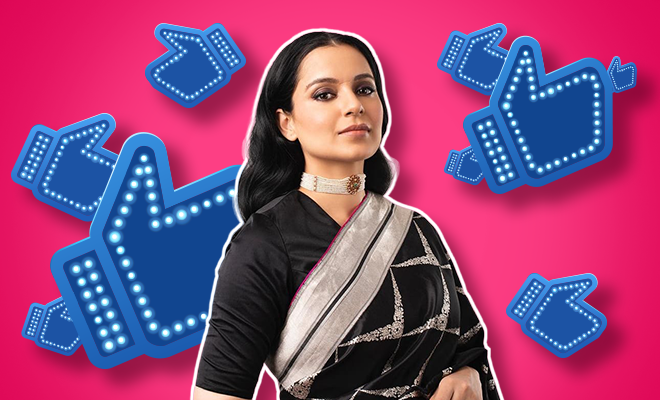 Kangana Ranaut Revealed That She Has A Secret Social Media Account But Does Not Stalk People. We Don’t Buy That

Social media, be it Facebook, Instagram, Twitter, Snapchat, is very addictive. It’s like a one-shop-for-all set up where you can get almost anything! Need a good laugh? Look for memes. Need some inspiration? Look for quotes. Need information on someone? You can tell what that person did on any given day, simply by following them on social media. But let me tell you, maneuvering through social media is a talent. Have you ever reached your crush’s ex’s brother’s friend’s dog’s page? If yes, then you definitely have this talent of stalking people online. If done with the right intention (killing time and finding goss), it’s harmless and rather intriguing! Don’t judge me, you know you stalk people too and it is perfectly normal!

I often wonder whether celebrities too have this harmless past-time activity. Do they spend a lot of time peeking into the feeds of other celebrities? I mean, knowing what a dog-eat-dog world it is out there, it would be rather tough not to, right? But then again, this is just wild speculation!

Kangana is the only one who has spoken about her social media game and the irony is for the longest time we thought she didn’t even have a personal account. In a recent interview, she finally revealed that she does, in fact, have a secret social media account. She said, “I do have a secret account, but I do not stalk people. If I’m not working I spend 7-8 hours on social media.”

Also Read: Kangana Ranaut Wants Her Biopic To Be Handled By Sister Rangoli Chandel. Wow, That Will Be Interesting.

If I was the interviewer my next question would definitely be, “If you don’t stalk people, what do you do for 7-8 hours on social media?” I mean, think about it, are you only going to read articles and shop online? It is human nature to let our inquisitiveness take over sometimes. I would have bought it when Kangana said she doesn’t stalk people had she not said she spends so many hours on social media! But even if she does a little harmless “catching up” but secretly, it’s okay!

I would love to find this secret account of hers just to see what kind of stuff she puts up. But more than that, I would love to find it to know how she managed to keep it a secret for so long. In today’s world, even if a celebrity goes to the washroom it practically becomes national news. Well done, Kangana!

In the same interview, Kangana also said that every time she gets angry, something constructive comes out of it. She said, “My anger is very constructive anger. Every time I’ve gotten angry in life, it has been for a reason to construct, to do better or to excel or for my team to excel. Like I said, when I left home, I did not leave because I just want to give my parents hell. I had a vision, I had a plan, so it’s been a very constructive emotion. I would like to go against practices that are pulling people down, which are not productive. What I do in anger has always worked for me. There is a child inside me that is beyond any logic.”

I think she is the only person who has ever said that. All my anger does is make a bad situation worse. I don’t even know what constructive anger feels like!

Celebrities maintaining a secret Instagram account is not a new phenomenon in the social media world. They might have their brand and a personal page, dedicated to following friends and family. Apart from there mega-popular accounts, celebs like Justine Bieber and Sophie Turner have private accounts that are dedicated to their other interests. For instance, Sophie loves reviewing sausages and so she has…

On the work front, she will be next seen as J Jayalalithaa in Thalaivi. The first look of this movie came out earlier this week and we are looking forward to seeing more of it soon!