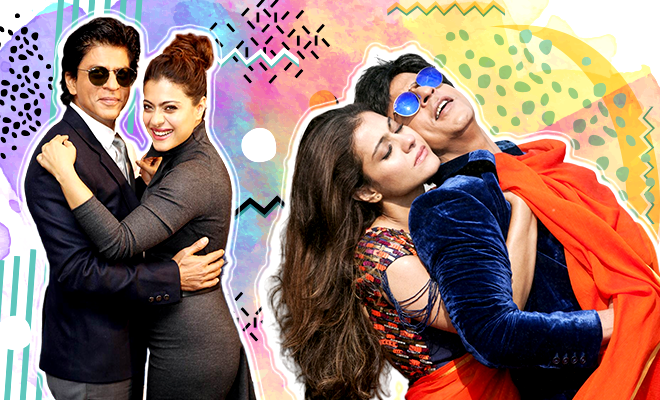 Kajol Was Asked If She Would Have Married SRK Had She Not Met Ajay Devgn. And Her Answer Got Us All Excited

If you are a 90s kid, there’s a distinct possibility that your idea of romance and love was modelled on watching the king of Bollywood spread his arms and use those eyes to woo our very soul. And while the actor is known to have delivered a blockbuster with almost every actress in the industry, no one has ever come really close to recreating the on-screen chemistry that the actor shared with Kajol. From movies like Dilwaale Dulhaniya Le Jaayenge to Kuch Kuch Hota Hai, this was a pair that went down in history, practically as the definition of romance.

Also Read : Ajay Devgan Tried To Troll Or Give A Back-Handed Compliment To Wife Kajol On Her Birthday But Failed Miserably

A thought that hasn’t just persisted in our heads but also in the heads of other fans was how do you deny that chemistry? It was sizzling but cute and we all wanted our Raj to treat us like that. Oh do’t roll your eyes! As if your dreamy guy wasn’t called Raj or Rahul. Anyway, Kajol was recently asked whether she’d have considered marrying SRK had it not been for Ajay Devgn and her answer had us going  ‘what if’ all over again. But also, we don’t want this because we want SRK for ourselves.

During an interactive session on her Instagram, where Kajol sought to connect with her fans by engaging in a fun ‘Ask me anything’ session, there were a number of unexpected questions that popped up, but one that seemed to have come right from our own hearts was when a fan asked her if she would have married Shah Rukh Khan if she hadn’t met her now husband Ajay Devgn. Now, in a perfect world or maybe a Dharma production, this would have been the cue to an alternate reality where we would’ve witnessed the love story of Raj and Simran but considering this was reality (ugh), Kajol just answered it in her cheeky style, and left it at a cliffhanger.

She wrote, “Isn’t the man supposed to be proposing?” and there we were, imagining what would have happened if he did. The two, who shared an electric bond on screen and a great friendship off-screen, were the OG #couplegoals before any of the recent couples came along on social media, which is perhaps why her answer left most of us wanting to know more.

In another question, a fan also asked her if she found her husband Ajay Devgn better as a co-star or Shah Rukh Khan, to which she responded by saying ‘Depends on the situation’. Clearly, everyone was as curious as us about her and King Khan, so when asked what bond she shared with the actor, she called him iconic and said that they were ‘friends for life’. And at this point, we will take anything we get.

Meanwhile, Ajay and Kajol will be next seen working with each other in their upcoming film, Tanhaji: The Unsung Warrior, that is based on the legendary Maratha general Tanaji Malusare. Ajay will be seen donning the role of Tanaji while Kajol would be playing the role of his wife, Savitribai Malusare. The movie is slated to hit the theatres on January 10, 2020.

Also Read : Gauri Khan’s Recent Throwback Picture of Her Husband And Kajol In Baazigar Reminded Us Our Fashion Disasters And It’s Hilarious