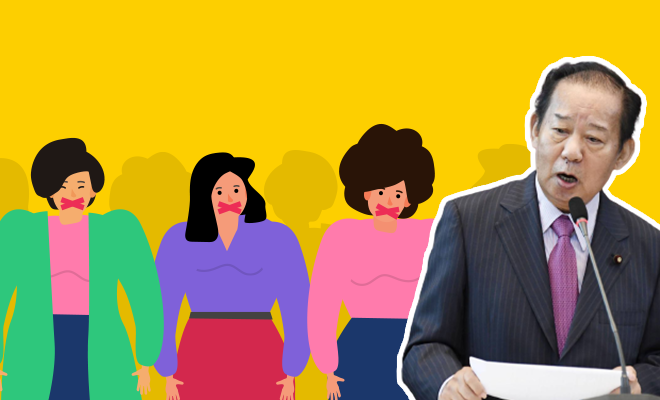 When we think of sexist men, a long list of people pops into our heads. From actors to politicians to neighborhood uncles or sometimes even our own family members, perhaps the easiest thing to come across in this society is men with a biased and sexist point of view towards women. However, one in particular who has caught all of our attention with comments that were not only derogatory but also demeaning is Toshihiro Nikai, Secretary General of the Japanese Liberal Democratic Party who spoke about how more women should be part of the ruling party’s meeting, but only if they’re quiet. The men of Japan continue to disappoint.

Coming across as worse than a token gesture towards inclusivity and gender parity, the 82-year-old Secretary General proposed a new plan that allows five female lawmakers to join the party’s key meetings as observers. And “observers” being the operative word here.

He shared that since the ruling Liberal Democratic Party had received enough criticism about being male-dominated, he meant to propose such an idea that turned out to be all things offensive to women.

Mentioning how even though the party is accused of being male dominated, it is the people who elect them, Toshihiro remarked, “it is important for the party’s female members to “look” at the party’s decision-making process.”

He said in a conference, “It is important to fully understand what kind of discussions are happening. Take a look, is what it is about,” he remarked . A local daily in Japan also shared details on the matter and revealed how even though women were made to be a part of the meetings, they wouldn’t have had a say in it after all.

Only a few weeks ago, Yoshiro Mori, the head of the Tokyo 2020 Olympic organising committee also in Japan, was fired for passing distasteful and sexist remarks at meetings.  After all, treating women as mere spectators and totally disregarding their say in the matter is neither fair nor acceptable.

Opposing the decision, and rightly so, were many people on twitter who called this step a nonsense remark. Melinda Wheaton, a cultural sociologist at the University of Waikato in New Zealand said, “People will just put women on them as a kind of PR exercise. I think it’s probably time to be asking questions as to why it is that we feel that men in their 70s or 80s are able to fulfil these roles better versus a man in their 40s or 50s, or a woman.”

Simply because society has for too long subdued women, the idea of a woman sitting exactly where a man is and voicing her own opinions still makes people uncomfortable.  However, the time is changing and it is better acknowledge just how competent and well-read they can be.