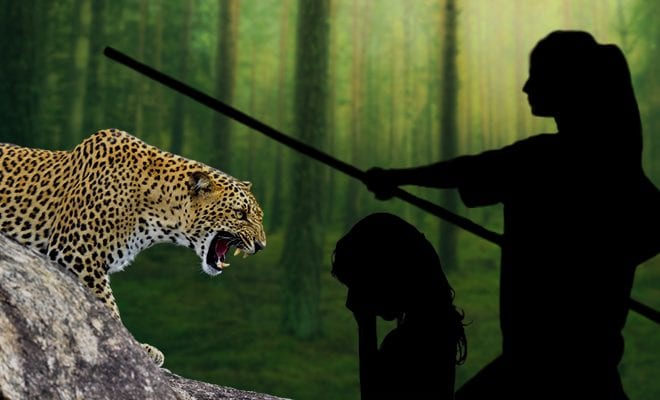 In Maharashtra, A Mother Fought Off A Leopard With Just A Bamboo Stick To Save Her Daughter

Whenever we talk about the differences between men and women, one thing that is a bone of contention is physical strength. An area where men supposedly do better. But that is not always the case. There have been women who have time and again proved otherwise. When the time comes, women have picked up the weapons and fought off the enemies to protect themselves and their loved ones – whether those enemies are abusers or deadly leopards.

Recently, in Maharashtra, a woman fought a leopard with a bamboo stick to protect her five-year-old daughter. Archana Meshram, the woman from the Junona village was on the road along the outskirts of her village when the leopard suddenly pounced.

The five-year-old girl was walking behind her mother, Archana Meshram when the leopard pounced on her. The mother was initially scared but watching her daughter in harm’s way, she gathered up her courage and hit the leopard with a bamboo stick.

Upon the attack, the leopard moved from the girl to attack the woman. But the mother doesn’t give up and continues hitting the leopard until the leopard escapes into the forest of Maharashtra’s Chandrapur district.

The five-year-old girl suffered some serious jaw injuries and was taken to the Chandrapur Civil Hospital by the forest personnel due  to the leopard attack. From there the girl was soon shifted to a government dental hospital in Nagpur.

The forest department, upon hearing of the leopard incident, had given some initial compensation amount for the treatment of the five-year-old. The girl is now getting treated at the Nagpur-based hospital where she will undergo surgery on Monday.

When the time calls, a mother/woman will always take up the courage to fight any enemy that harms them or their loved ones – even if the enemy is a leopard. As a society, we believe that it is a man’s duty to protect the family. But I strongly believe that protection is a shared duty. A woman is as capable as a man to protect her family and herself. And we need to raise our girls believing that.