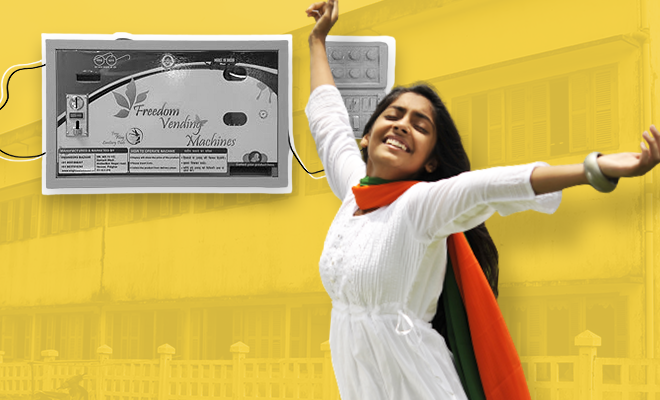 In An Attempt To Boost Menstrual Health, Sanitary Pad Vending Machines To Be Installed In Over 1,000 Schools And Colleges In UP

When I think about how many girls miss out on a quality education because they don’t have access to basic menstrual health amenities, it truly makes me sad. Those girls not only have to drop out of school but they also have suffered through health problems because of the substitutes they use while they are menstruating. Cloths, manure sometimes even sand and ashes. To them, sanitary pads and tampons are a luxury that they can’t afford. It’s a disheartening fact. And if we want to empower those girls, the first step is easy accessibility to menstrual health products. And surprisingly, the officials in UP have gotten the idea. For they are installing sanitary pad vending machines in over 1000 government-run schools and colleges. The pandemic has shown just how desperately we need to make sanitary pads accessible to women everywhere. This is a step forward.

The thing is, India has a lot of problems with the concept of menstruation. Women are shamed and ostracized from society while they are on their period. Of course, Indians are about as close to changing their mindsets about menstruation as we are to controlling this pandemic. However, all these backward traditions have led to bigger problems. Period poverty for instance. Even today women living on fringes of society have no access to sanitary napkins. Just a few days ago, we talked about how this is a rising threat especially in the slums and down-trodden areas of Delhi. Young girls are being forced to drop out of school due to a lack of menstrual hygiene knowledge and products.

To combat precisely that and promote menstrual health, UP officials have taken up the initiative of installing sanitary pad vending machines and incinerator machines in at least 1,000 schools and colleges.

Each school would be granted Rs 30,000 to install these machines for which a budget of Rs 3 crore had been sanctioned by the centre.

To carry out this mission, the centre has sanctioned a budget of Rs 3 cr. Out of which each school will be given Rs 30,000 to install these machines. Director general (school education) Vijay Kiran Anand said the budget had been sanctioned under the Samagra Shiksha Abhiyan at the recent meeting held at Shastri Bhawan in New Delhi. He said, “The work will be undertaken on a priority in the interest of the girl students of Uttar Pradesh.”

According to reports, An education department official shared the findings of a 2019 survey. This survey was conducted in all gram panchayats of 75 districts of UP by Integrated Child Development Services (ICDS). It showed that as many as 5.13 lakh young girls in the age group 11-14 years dropped out of schools in 2018-19.

Also Read: #Voices: 22.5 Lakh Women In Haryana To Get Free Sanitary Napkins For A Year. Accessibility Is The First Step Towards Empowerment

These numbers are staggering. After digging deeper into the matter we came across an earlier survey that was conducted by the UNICEF that showed that 85% of women and girls in India still use cloth while menstruating. This is because they can’t afford sanitary napkins and have poor knowledge of the matter.

You see, UP is not the first state to start an initiative to combat period poverty. A few months ago, the Haryana government announced that they would be providing free sanitary napkins to over 22.5 lakh women for a year. However, as amazing as these initiatives are, what concerns me the most is the execution. That’s where states like UP and Haryana struggle the most the most despite adequate funding because there is no transparency.

But I’m pretty sure they aren’t going down that road at the moment. Right now, we should celebrate the fact that state governments are recognizing the rapidly growing problem. After all, easy access is the first step towards ensuring every girl and woman in our country can maintain menstrual hygiene and is not forced to use unreliable substitutes while on her period.

An NGO In Haryana Has Set Up Pad Banks To Help Less Fortunate Women While Also Educating Them About The Health Benefits. This Is A Great Initiative