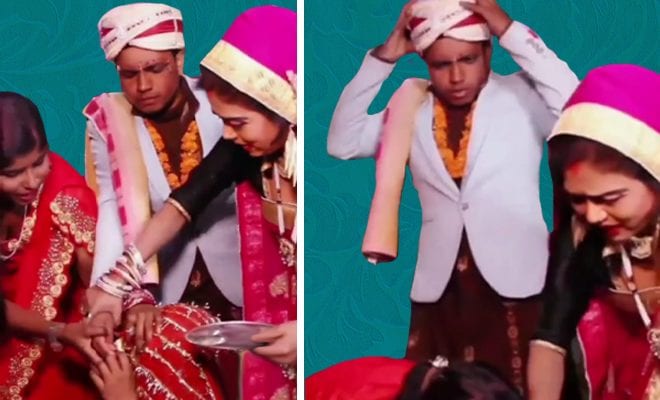 Groom Runs Away After Bride Faints In Mandap. What Happened To ‘In Sickness And In Health’?

It’s not possible for an Indian wedding to be uneventful. Even when the wedding is relatively normal, something or the other happens that make it unforgettable. An uncle who got too drunk and started hijacking the mic, an aunty who was desperately playing matchmaker, that cutie who flirted with you and much more – Indian weddings are never dull. Almost every other day, wedding videos go viral – be it bizarre, funny or cute. Recently, netizens are baffled by a video featuring a groom trying to run away in the middle of the sindoor ceremony.

You can see in the video that the groom applies the sindoor on the bride. It’s an important ritual in Hindu weddings. However, the moment he does that, the bride collapses, almost like she was allergic to their marriage. Looking at that, the groom tries to run away and as he does that, other women at the mandap try to stop him. However, he manages to escape.

In sickness and in health? He doesn’t seem to believe in that clearly. I mean, did he think that she got possessed? Why did he flee? So many questions.

There are so many bizarre videos out there…it’s hilarious but I also get surprised with the kind of couples being made. Like imagine having a groom who bails at the slightest sign of trouble.

ALSO READ: At His Wedding, This Groom Snatched A Rasgulla From A Girl’s Hand And Gobbled It Up

Netizens found the video quite confusing. Some people expressed concern for the bride…some speculated she did that because she didn’t want to marry him. A few people also called it publicity stunt, although I doubt that’s the case.

ALSO READ: Two Grooms Arrived At A Bride’s House To Marry Her, She Married One And Went Home With The Other