First Katy Perry, Now Deepika Padukone And Kartik Aaryan Overlooked The Airport Security Protocol. Being A Celebrity Doesn’t Give You A Pass. 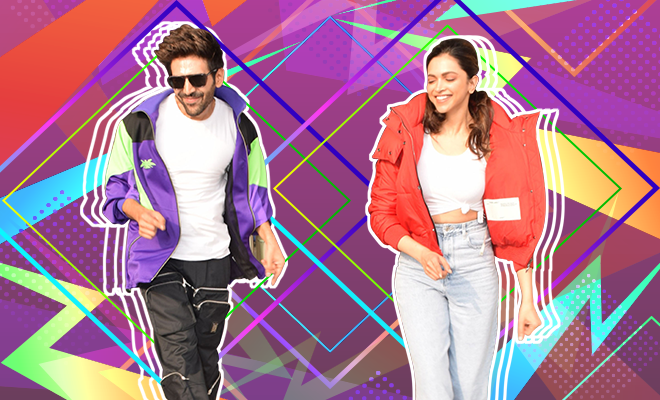 Bollywood has it’s own charm that attracts several people to it. So those who successfully make it as an actor, cannot remain untouched by its effect. In fact, they even say, you can take the actor out of Bollywood, but you can never take Bollywood out of an actor. And putting this statement to truth were Bollywood’s two most loved and celebrated actors, Kartik Aaryan and Deepika Padukone, as they were seen giving into their impulse of going all filmy and extra when the two met each other over the weekend at the Mumbai Airport. Except, even though their spirit was contagious, the fact that it happened on an airport, overlooking a bunch of security protocols was what rubbed us the wrong way.

After being spotted getting down from their cars at the Mumbai Airport, the Padmaavat actress and the young star Kartik Aaryan were recently captured giving the word spontaneous a whole new meaning. Soon after the two exchanged warm greetings, Deepika Padukone could be seen telling Kartik how he had earlier promised to teach her the hook step of the song Dheeme Dheeme from his upcoming release Pati, Patni aur Woh. Making good on his promise, there he was, ready to give a quick tutorial to Deepika right then and there.

A video that is now viral, shows the the two celebrities trying to find a corner at the airport to get the hook step of the song right. With in minutes, a crowd emerged to witness the spontaneous dance off between the two Bollywood stars, and with a portable music player in the background, the two were quick to jump into it as Deepika took the choreography lessons quite seriously. This was for the #DheemeDheemeChallenge that Kartik Aaryan had started as a way to promote his movie, but clearly it was taken to a whole new level by these two actors. In fact, Deepika had even posted a story earlier requesting fans to gather around at Gate No. 1 of the airport to see something exciting. Only if exciting meant negligence of a certain code and conduct at a high-security place like an airport.

The crowd that was cheering on, enjoyed their free show, while some of the netizens couldn’t help but troll the actors for probably choosing the most inappropriate time and place to give each other dance lessons. And we can’t blame them, because it won’t be the first time that celebrities have conveniently turned a blind eye to the laws and decorum of a place. A little while back, when Katy Perry had visited Mumbai for a concert, she too chose to walk right past the security check in, as the officer on duty demanded her passport.

Kartik and Deepika didn’t consider the fact that their shenanigans will cause a lot of commotion and distraction at the airport. They could have definitely found time to pull off this challenge elsewhere. However, choosing to overlook not just the law here but also the trolls, the two could be seen enjoying themselves thoroughly as the actress even aced the step later on, as she asked to be captured on video to see if she had gotten the step right. To what extent can you go for promoting a film?

Come to think of it, if either of us had tried to pull something like this, we would most certainly be either gawked at like we are crazy or escorted out of the proximity of the airport, or even both. But nothing of the sort went down with the two film stars, as they goofed around and seemed to have a rather fun and candid moment of bonding. After bidding their goodbyes, the two went ahead to catch their flights, but Deepika Padukone was seen giving a note of thanks to the Luka Cuppi actor on her Insta story as she wrote, “Thank you @kartikaaryan for your warmth & enthusiasm! All the best & lots of love!”

Kartik is currently awaiting the release of his upcoming movie Pati, Patni aur Woh with actresses Bhumi Pednekar and Ananya Pandey that is slated to release on December 6!

Also Read : Amrita Singh Wants Sara Ali Khan To Focus On Her Career And Not On Kartik Aaryan. This Is Every Indian Mother Ever