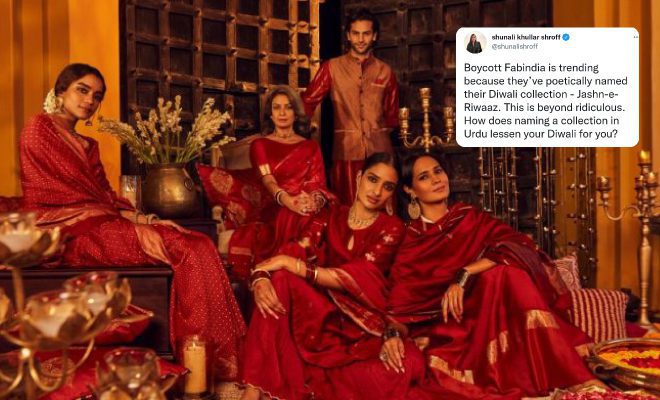 FabIndia Gets Backlash For Naming Diwali Collection Jashn-e-Riwaaz, Pulls Down Ad. The Intolerance Is Stifling!

I’m just so tired of waking up to the news that people on Twitter have found something new to ban. I mean, how do so many people have so much free time and energy to start banning things on the internet in the name of religion, especially ads by  lifestyle brands. First, it was Tanishq’s baby shower ad and now it is FabIndia’s Diwali collection ad. I don’t know who needs to hear this… wait, scratch that, I do know who needs to hear this. All the people on Twitter; hear this loud and clear, India is a secular country! It’s written in our constitution, for crying out loud. So, what is the basis of banning FabIndia or boycotting the clothing brand because it named a collection Jashn-e-Riwaaz? Honestly, it just doesn’t make any sense to me.

FabIndia recently came out with their latest festive season collection titled ‘Jashn-e-Riwaaz’. On October 9, they announced the launch by tweeting, “As we welcome the festival of love and light, Jashn-e-Riwaaz, by FabIndia is a collection that beautifully pays homage to Indian culture…” But on Monday they removed the tweet as a result of the extreme backlash they faced from intolerant netizens.

According to reports, the ad promoted the launch by showing men and women dressed in ethnic Indian attire in the shades of red. However, it was also pulled back because of the #boycottFabIndia trend that started on Twitter, accusing the clothing brand of ‘damaging the Hindu festival of Diwali’. Seriously?

Also Read: #BoycottTanishq Trends Again As Another Ad Promoting Cracker-Free Diwali Faces Backlash. Again, We Don’t See Why This Was A Problem

And once the #boycottFabIndia started trending on Twitter, people from across the country had a (ridiculous, in my opinion) comment to make on the ad and the tweet. And joining them was none other than the BJP Yuva Morcha President Tejasvi Surya, who in his tweet wrote, “Deepavali is not Jash-e-Riwaaz. This deliberate attempt of abrahamisation of Hindu festivals, depicting models without traditional Hindu attires, must be called out. And brands like @FabindiaNews must face economic costs for such deliberate misadventures.”

This deliberate attempt of abrahamisation of Hindu festivals, depicting models without traditional Hindu attires, must be called out.

And brands like @FabindiaNews must face economic costs for such deliberate misadventures. https://t.co/uCmEBpGqsc

Our festival is Diwali but
according to @FabindiaNews Diwali is called Jashn-e-Riwaaz.
So #BoycottFabIndia Now.
As if they have 3rd class collection pic.twitter.com/eHhSVwBjch

I struggle to understand, if they really dont get it. Earlier Tanishq then Manyavar, now fabindia. There is always huge uproar forcing apologies and withdrawl of such ads and still one after other brand repeats the same. It is something bigger than visible to eyes.

Yes, of course 👍🏻🤝 our silent and tolerance is being taken for granted. Such cases of defaming Hindus rituals, festivals are increasinglyday by day 😡 #BoycottFabIndia

Even the Uttarakhand MLA Rajkumar from BJP also commented on the FabIndia ad and wrote, “Deepavali is not Jash-e-Riwaaz…Period!!! Seems like Fab India has done this deliberately to hurt Hindu Sentiment. #BoycottFabIndia”

These are guys with hidden agenda, must surely boycott all their products

FabIndia is owned by William Nanda Bissell ..
Converted Hindus are more dangerous than born abrAhimics..Look how bit by bit they are eliminating India's Hindu Identity..
Be it @TanishqJewelry or @FabindiaNews all are anti hindus.. pic.twitter.com/AokTdUeYcc

BOYCOTT EACH AND EVERY BRAND WHICH HURTS HINDU SENTIMENTS 😠 #BoycottFabIndia

Where on one side you had netizens call out FabIndia for its ad, on the other side you had another group of sensible, educated netizens who supported the fashion brand by stating that secularism in India has been prevailing for years. And that boycotting and banning the clothing brand just shows how intolerant and regressive the Indian society has become.

Boycott Fabindia is trending because they’ve poetically named their Diwali collection – Jashn-e-Riwaaz. This is beyond ridiculous. How does naming a collection in Urdu lessen your Diwali for you?

Cancel Cancel Culture. #Zomato #FabIndia . But for that people have to be more willing to first not cancel themselves.

Akbar was a secular king.
But 21st century India is going backwards..
What a ridiculous outcry over an advertisement.
India needs to be "Fab" in its Secularism.

"Boycott" also is a non-Hindi word. They are using another language to boycott an ad which used a different language. They themselves don't know, how much Urdu they use in their daily life conversation.
Irony!!

Also Read: BoycottLux Is Trending On Twitter Because It Is Endorsed By Deepika Padukone. Is This The Downfall Of Brand Deepika?

Honestly, I share the same opinion as the latter group of netizens. No matter where in the country you live and no matter what religion you belong to, everyone celebrates festivals like Holi, Navratri, Christmas, etc. Heck, we even celebrate Halloween now in urban cities because festivals are all about coming together and having fun, after all! Being secular and celebrating our festivals with everyone is what Indian culture is made out of. But those asking to ban and boycott FabIndia are just examples of the regressive and intolerant our society is, and just how much it is stifling creativity. Imagine coming up with interesting ideas and having to shoot them down because you fear a bunch of trolls might start a boycott trend online!

Instead of accepting and including everyone, just like we used to in the past, we have started forming boundaries. And if history is any proof, then we all know that forming boundaries has never done any good to anyone.