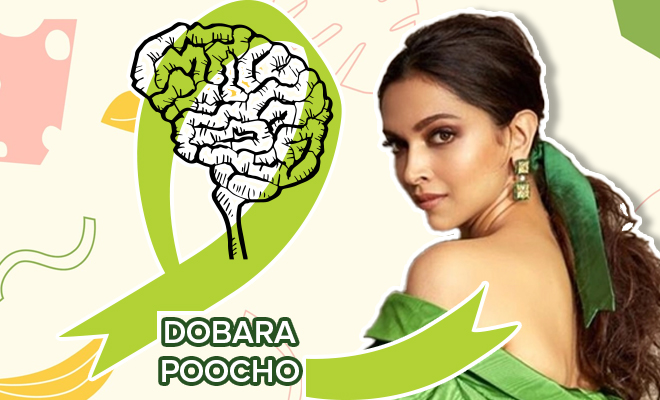 A few weeks ago when the news of suicide of actor Sushant Singh Rajput broke, it shocked everyone and rustled up intense debates about nepotism, favouritism, lobbying and what not, which are still going on. However, the real problem that led him to take the extreme step, or at least one that is being touted as the reason is a mental health issue, one that might have not held the spotlight as long as it should have. It really frustrates me that a sensitive and often misunderstood topic like mental health couldn’t get the attention it deserves. It was what needed to be talked about and not buried under the tsunami that was the nepotism debate.

Thankfully, some people understand the seriousness of the issue and are working towards it. One of them is Deepika Padukone. The actress has struggled with depression in the past and has an organisation called Live Love Laugh Foundation (LLLF) that aims to spread awareness about mental health and help people struggling with the issue.

Yesterday, she announced a special awareness drive ‘Dobara Poocho’ (Ask Again) with an IGTV video on her Instagram. This campaign urges people to check on their friends and family members who might be going through mental health issues. Honestly, I love the fact that it is meant for people who can help rather than those who are dealing with it. Asking and listening instead of expecting and waiting for them to come and open up can really make a big difference.

The video is a 4-minute long, heart-warming short film with four different stories. In each of them, one person seems to be alright until the other constantly asks and they finally talk about their feelings. The whole point of this awareness campaign is to lend an ear to people who might be suffering from mental health issues but are uncomfortable opening up about them. By putting the onus on the person who is not struggling to ask and check in on them constantly, it allows them to open up about their feelings and make sure they know someone is there for them. Many a times we turn a blind eye or don’t even notice when someone’s in pain and this campaign stresses on realising our responsibility towards those around us.

I feel it is high time we make ourselves available for people around us and understand their emotional needs and vulnerability. Prioritising mental health in today’s times (given the global pandemic situation that’s sucking up jobs and what not) becomes undeniable and unavoidable. And, the Dobara Poocho campaign by the LLLF helps make sure that people who are struggling are listened to and feel validated and that is the best thing you can do right now.

Also Read: Deepika Padukone Gets Awarded For Her Contribution Towards Mental Health Awareness. And She Walks The Talk

Deepika also posted a video last week where she spoke to two psychiatrists Dr Soumitra Pathare and Dr Shyam Bhat to address some questions related to suicide and to understand what makes people take their life. The talk session was all about understanding suicide tendencies and what triggers it. This campaign is the need of the hour and we applaud Deepika for using her influence to make everyone understand the importance of listening and supporting people who are struggling with mental issues. Kudos to her!