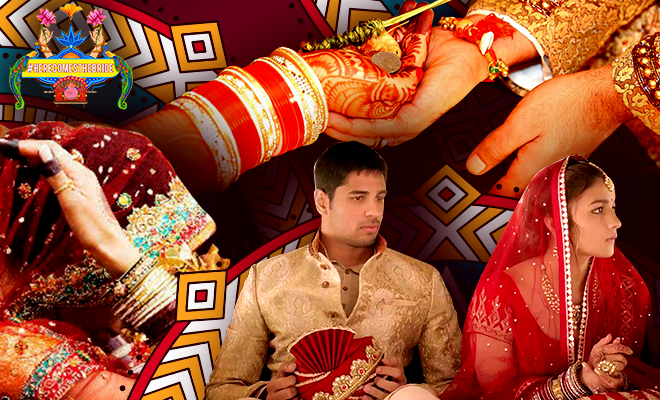 There’s a reason why Hindu nuptials are also called ‘The Big Fat Indian Wedding”…they are long, filled with tonnes of rituals and go on for hours. The traditions, also called rivaaz, are practices that have been passed down generations, with origins that date far back, making most of them untraceable. Modern Indian weddings have done away with most of these traditions, which are just time-consuming and get in the way of a tight 3-day schedule that people like to follow and time for. Yet, there are some traditions that have stood the test of time and are still practiced at weddings to this day.

In the chaos of putting together a wedding and rushing to outfit changes, it often leave no room for these traditions to be explained. Some of their origins are outdated, even sexist, and are deemed indisposable by the elders in a family. While most Hindu wedding traditions are rooted in pure and wholesome ideas, some have patriarchal undertones and frankly can be done away with.

Exclusion Of The Bride Or Groom’s Mother

In some cultures, especially Bengali weddings, the mother of the bride or the groom is not allowed to witness the ceremony beyond the Vara Satkaarah. This is done because it is considered ill-luck for a mother to witness the nuptials of her children, given that she gave birth to them and loves them too much. The fact that that logic is so flawed in itself should be enough to throw anybody off. I remember when my mother was not allowed to sit for my sister’s wedding, the entirety of which she was instrumental in planning and executing. She mentioned how it was saddening to not see the Jai Mala or the Sindoor Daan, and it broke my heart too.

Do away with it, please!

When traced back to its roots, the vidaai ceremony was performed when young women were given away to kings and princes as a gift, property or as a clause in a treaty to foster peace between two kingdoms. This ritual has deep connotations of daughters being deemed “paraya dhan” in our culture, throwing rice or coins as a gesture of repayment to her family for raising her and nurturing her. Guys, shaadi hai ya service? Thanks to Bollywood, the vidaai ceremony has been romanticised as a weeping new bride says goodbye to her family before she heads off to the groom’s house. This is very unnecessary, with young couples refraining from crying on a happy occasion and leaving the venue with exuberant spirits, including the families. At this point, the ritual is just a namesake, so, might as well do away with it completely.

One of the most important rituals at a Hindu wedding, a kanyadaan is done by the bride’s father, who ‘gifts’ his daughter to the groom and fulfils all his earthly duties by doing so. According to an old saying, a man can never claim a single woman until she is offered by a man from her own family. Interestingly, the kanyadaan has no mention in the Vedas, which talked about the woman’s consent more than being a ‘daan‘ or something that means charity. This means that this ritual is a product of Indian society’s patriarchal values alone. Brides today have more or less stopped participating in this ritual, with it only being ceremonial. But why stop at that? I would love for my father to be there holding my hand at my wedding, but not to give it away.

As a practice, the time of the wedding, or the Muhurat, is picked through a calculation of  the bride and groom’s date of birth. Astrologists calculate the position of planets and stars in order to pick the most auspicious time. This is based on their gautra, the ancestral lineage or the ancestor’s original clan. But, according to an outdated Hindu belief, marriages should not take place within the same clan.

How many times have you been on a first date and had a great time, but before leaving, checked up on their gautra, just in case? Never! What a muhurat does is only put young couples in awkward positions to have their palms read and be at the mercy of Panditjis to fix their wedding hours. I have been to a wedding where it started at 3 in the morning, by which time, the bride was exhausted and could barely keep up. That’s so not cool.

The Gau Daan is a ritual with one of the most sinister undertones than all the rest in this list. This is when the bride and groom’s family exchange gifts right at the venue before they are made to sit on the mandap. This ritual is deeply rooted in the phenomenon of dowry in India, where the groom’s family with ‘collect’ before letting their son sit for the wedding. NO, just NO.

We are all for an equal exchange of gifts at the wedding but maybe do it later?

ALSO READ: 9 Types Of People You May Want To Reconsider Inviting To Your Wedding

The Shilarohan is a part of the Saptapadi or the Saat Pheras, where, in some cultures, the bride is made to climb over a stone to stand on it. This symbolizes a bride’s strength and willingness toward fulfilling her marital duties and taking care of her new family. The only thing, the stone is often too small and very uncomfortable to stand on. It can barely balance on its own, much less keep a person, in a heavy lehenga, standing. We don’t have anything against its origin but can we not put brides on stones at the mandap? How can you test a person’s strength by making them stand on stones? When is she ever going to have to face a difficult familial situation, while balancing on a rock? Uhm, never.

This one is just downright mean! In many cultures, the baraat is said to delay their arrival at the venue on purpose. While it’s regarded as a bit of fun and games, it’s based on the fact that a bride’s family will always stand in wait for the groom. Sometimes, the grooms won’t even step off the horse until the bride’s father has to go and request him to. HAHA, no. Just be polite, can you?

What are some of the other bridal traditions that you think are outdated and need to be skipped? Let us know!