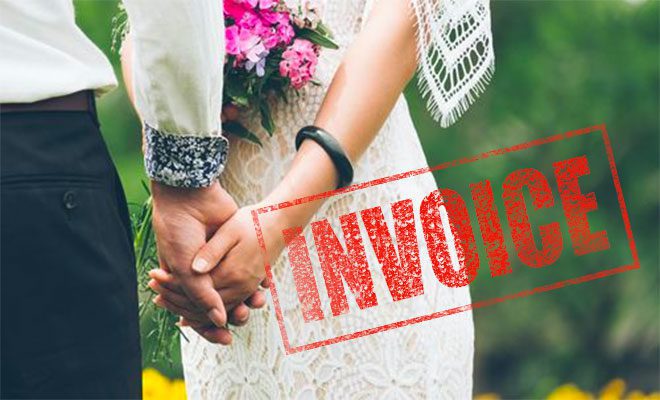 A Couple Sent A Bill To Their Wedding Guests Who Didn’t Show Up Despite RSVP-ing!

Everyone who knows me knows that I love weddings. I mean who doesn’t? They are fun, colourful, and filled with great food—the best part honestly. But as fun and cool as they are to attend, they are usually a bomb to pay for. Yes, weddings are expensive as hell and there is no denying that. This is why most couples now end up asking for an RSVP, so that they don’t waste money and food. And yet, there are always those few guests who RSVP but don’t show up. What do you do then, if you’re the bride and groom who’ve paid for these guests’ stay and food? Well, this one couple from Chicago had figured it out. They sent a bill to all the guests who didn’t show up to their destination wedding despite RSVPing!

Chicago couple Doug Simmons and Dedra McGee had flown down to Jamaica to get married at the Royalton Negril Resort & Spa. Their wedding was attended by a hundred guests. However, they had RSVPs from 108 guests. Turns out, eight guests RSVP-ed ‘Yes’ but were a no-show. Now destination weddings can be super expensive. So what did Doug and Dedra do? Well, Doug, the groom, decided to send these guests and their plus ones who did not show up at the wedding despite RSVP-ing, a legit invoice, which included the per-head costs of food, stay and other arrangements!

According to Dlisted, Doug’s invoice was addressed to the ‘No Call, No Show Guest’ and asked for $240 ($120 for the guest and $120 for their plus one), along with a note that said,

“This invoice is being sent to you because you confirmed seat(s) at the wedding reception during the Final Headcount. The amount above is the cost of your individual seats. Because you didn’t call or give us proper notice that you wouldn’t be in attendance, this amount is what you owe us for paying for your seat(s) in advance. You can pay via Zelle or PayPal. Please reach out to us and let us know which method of payment works for you. Thank you!”

What’s more, there’s a due date of one month mentioned on the invoice, within which the guests must pay!

Also Read: Wedding Horse Ran Off With The Groom On It, Family Chased Them For 4 Km. Here’s Hoping They Can Look Back And Laugh On It

The internet peeps who came across the bill had a lot of opinions on the matter. And to no one’s surprise, most of them were in favour of the practice. Because let’s face it, weddings are expensive, and guests who take that callously need to realize that.

I don’t think I’ve ever seen a wedding reception invoice before lol pic.twitter.com/ZAYfGITkxP

I’d send it back right away pic.twitter.com/LHa7EAC1ng

I remain stunned that more people don't say:
Hey instead of a gift, we'd love for you to celebrate our day with us, can you chuck in $50 (whatever) for the dinner and drinks with your RSVP and we'll call it even.

Maybe I'm naive, why don't people do this

Actually guests owe some respect what's the point in RSVP lists? Granted this is petty but to say guests owe nothing is really disrespectful and actually shows an arrogance similar to this bride/groom

Also Read: In This Unique Wedding Tradition, The Groom Dresses Up As Bride And Vice-Versa

Informing the couple as soon as you realize that you might not be able to attend the wedding despite can save a lot of money. And if as a guest you can’t value the couple’s time, money, and resources, then well I have to say get ready to get a bill.

This Bride Took Her Love For Golgappas To A Whole New Level. You Do You, Girl!