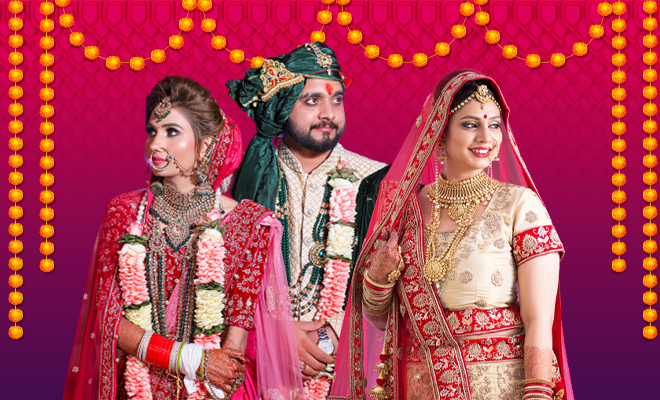 Chhattisgarh Man Marries Both Girlfriends In The Same Mandap In A Bizarre Throuple Love Story!

Since I grew up on an unhealthy dosage of sappy Bollywood romcoms, it should come as no surprise that I am someone who really believes in love. I get butterflies in my stomach before every date. Okay, I have very low standards. But the point is I am a hopeless romantic. Which is why, when I read about this man from Chhattisgarh who married both his girlfriends in the same wedding mandap because he loved both of them, I was more amused and excited than anything else. Yes, it is bizarre but how often to do you hear about a throuple in India?

On 5th January, Chandu Maurya, from Chattisgarh, married two women in the same ceremony in front of 500 wedding guests. A video of the ceremony, photographs and the wedding invitation card has gone viral on social media. I would’ve loved to be a fly on the wall for this wedding. Chandu told HT, “I decided to marry both of them because they both loved me. I can’t betray them. They agreed they both will live with me forever.”

Chandu is a marginal farmer and labourer in Maoist-affected Bastar district in Chhattisgarh. He said that he fell in love with Sundari Kashyap when he had gone to Tokapal area to install electricity poles. They planned on getting married. However, a year later Chandu met Haseena Baghel while she was attending a wedding. They fell in love also.

Also Read: This Wedding Got Extremely Complicated After The Groom Ran Off With His Girlfriend And The Bride Married A Wedding Guest.

Wow, I can barely handle one relationship. This whole thing is calling out my singlehood in so many languages. Even then, you’ve got to love a bizarre throuple love story!

This Bride Made Sure Her Bridesmaids Don’t Gain Weight, Get Pregnant Or Dye Their Hair Before Her Wedding. How? She Made Them Sign A Goddamn Contract

GET HAUTERFLY IN YOUR INBOX!
Related ItemsTrendingmanthroupleman marries two women in the same mandap