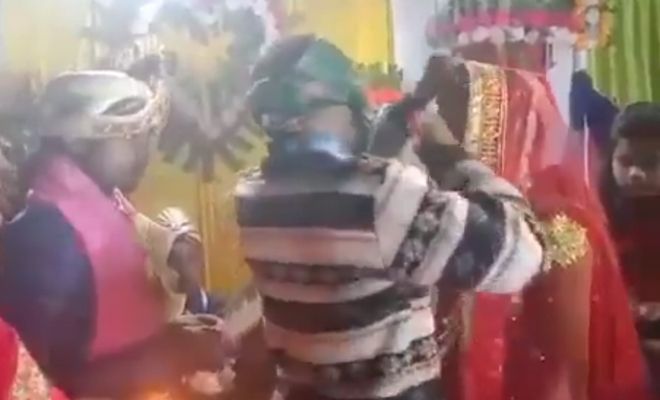 Luckily, my mother wasn’t one to care about Ekta Kapoor shows or any Hindi family serials while I was growing up. However, I was still subjugated to watching these shows because of my grandma. I always wondered how unrealistic and unnecessarily extra these scenarios were. Surprisingly, they are not as unrealistic as you might think. I saw a prime example of this when I read this news of an ex-boyfriend gatecrashing his girlfriend’s wedding in Chandigarh. Talk about dedication.

In UP's Gorakhpur, a spurned youth gatecrashed an ongoing wedding and applied vermilion to the to-be bride. Families and relatives tried to overpower him resulting in a major ruckus at the venue. pic.twitter.com/Ak94I50WRo

Very similar to a dramatic Hindi serial scene, an ex-boyfriend interrupted his girlfriend’s wedding in Chandigarh while she was going to put the varmaala on her groom. The Chandigarh man then proceeds to forcefully apply sindoor to the girl. This bizarre incident happened in Gorakhpur. The couple were about to exchange the varmaala when the ex-lover hijacked the wedding. The video of the incident went viral as someone had recorded it.

The video shows a bride and groom getting ready for the varmaala when the ex-boyfriend suddenly appears in the frame. He stands in the middle of them and forcefully tried to put sindoor on the bride’s forehead. To this, the bride stepped back and turned away. What is with this sense of entitlement? Moreover, I am also lowkey concerned by how passive the groom is.

Also Read: Think Your Periods Are Tough? Consider The Life Of This Woman From Chandigarh Who Cries Tears Of Blood On Her Period

According to reports, The ex-boyfriend had gone out of town for some time and the girl’s wedding was fixed with the groom in the meantime. When the boyfriend found out about this, he decided to show his love for her by gatecrashing the wedding.

I cannot decide whether to be appalled by this or amused. Don’t get me wrong, I am not condoning this type of entitled and immature behaviour. However, the resemblance to a dramatic Hindi serial wedding scene is lowkey amusing to me as well. Anyway, luckily the wedding guests interjected this and stopped the erratic behaviour.