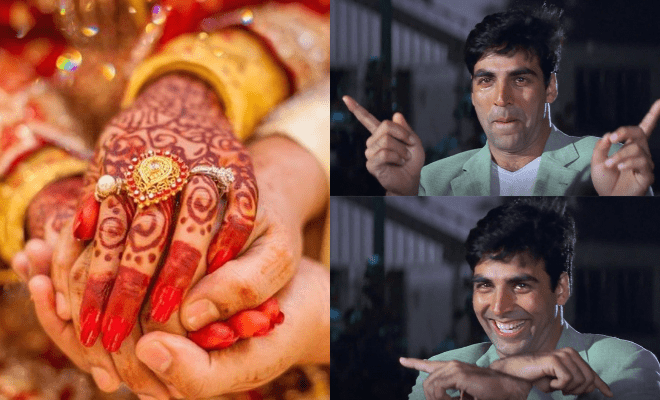 In Madhya Pradesh, Brides Get Swapped At A Wedding Due To Power Cut. Ye Kya Hera Pheri Hai?

A wedding household is quite a chaotic one and we can all agree to it. We have all the aunties and uncles and other relatives enjoying the festivities. There is music, dance and of course, there is food! And to be honest, I like to be a part of the wedding shenanigans because I love seeing all my cousins, having the most fun with them and also dressing up as my best self as well. I have heard of a lot of common problems that arise while organising a wedding but a bride swap happening is something I have never heard of. But in a bizarre incident in Madhya Pradesh, two brides have gotten ‘swapped’ during the exchanging of the vows! Yes, you read that right, that two brides got exchanged while the vows were being said and this mistake was noticed after the brides reached their in-laws’ place.

As per reports, this incident has taken place in the Aslana village of Ujjain district in Madhya Pradesh. Rameshlal’s two daughters, Nikita and Karishma were supposed to get married to Dangwara Bhola and Ganesh, two men belonging to different families. To add to the already ongoing chaos, there was a power cut when the wedding was taking place.

Given the brides’ faces were covered in veils, nobody came to know that the brides have gotten exchanged. The families also realised this mix-up after the brides had reached their in-laws’ homes. This caused a clash between the families as well. But thankfully, this mistake was rectified later and the issue was sorted out as well.

Also read: Tamil Nadu Couple Gets Gifted Petrol And Diesel By Groom’s Friend. We All Need Such Thoughtful Friends

Phew, I am glad the matter was resolved and the brides were sent back to their actual husbands!