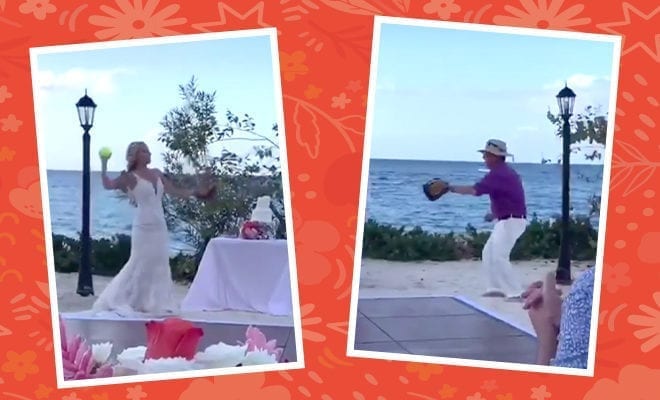 Bride And Her Father Ditch The First Dance For A Game Of Catch! Netizens Love The Reason

At the cost of sleeping hungry tonight, considering my mother reads all my articles and she might not take what I have to say next all that well, I will admit that I am a daddy’s girl. Unlike the popular opinion wherein girls are said to be more close and connected with their mothers (which I also am), there is just a different connection that I have with my father. One that precedes any other. And turns out, I may not be the only one with a best friend for a father, for this woman from Texas too shares a deep connection with her dad but she showed it off as a bride

We say this after we came across the news of Sarah and Hunter Larsen from Texas tying the knot in Jamaica at a destination wedding. But what really caught our attention was not the bride and the groom, but the bride and her father who made her wedding extra-special with one super cute gesture!

The bride, Sarah, was done with exchanging her vows with her now husband and ready for the next ritual of the wedding to follow, which would be the first dance with her father. Except, she couldn’t help but feel a little inhibited dancing in her heavy gown, which is when her father decided to stir things up.

Also Read : A Bride Is Frustrated That Her Sister-In-Law Copies Everything She Does. Including Wanting The Same Wedding Dress

Ditching the first dance ritual for a game of catch, Sarah and her father set a new precedence for all the fathers of the brides out there. In between their dance to “yellow” by Coldplay, the two immediately split up for a game of catch as the groom was seen handing them a softball along with hand gloves!

The video that captured the unique game of catch was shared on TikTok by the woman and is already going viral. The text on the video reads, “Sarah and her father can’t really dance…and didn’t want to feel awkward…So they thought about something else.”

The video went on to inspire several netizens who thought it was beautiful to have a wedding that would be so personal and according to the likes of the bride and groom, and not simply about following rituals blindly. After all, who would know a daughter better than her father?

Also Read : This Bride In UP Left Her Wedding To Go Collect A Certificate For Winning A Council Seat

GET HAUTERFLY IN YOUR INBOX!
Related ItemsFeaturedTrendingbride swaps first dance with playing softball with her fatherbride and her father ditch the first dance for a game of catchfather and a bride play a game of softball instead of having their first dance