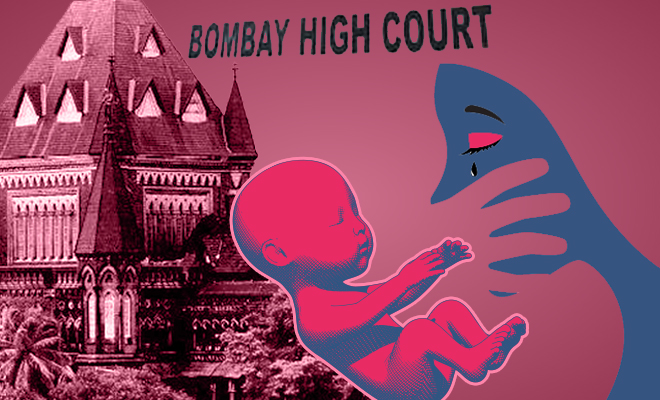 I strongly believe that every woman should have absolute control over her own body. Which is why, when it comes to a controversial topic like abortion, my stand is pretty clear. However, there are people who staunchly believe that abortion is a huge moral dilemma and that it equals murder. And I am not even considering that societal factor here. The truth is, everything isn’t as black and white as it’s often presented. Reality always operates in the grey area. Whatever you choose to believe, even you have to agree that there are times when a woman should have the right to terminate her pregnancy, even if it’s too late and this shouldn’t be held against her. And that right there is the grey area.

The Bombay High Court permitted a 17-year-old rape victim to terminate her 25 week pregnancy despite being advised against it by a medical board. Of course, some of you might argue that it’s not that baby’s fault. However, before you put forth that argument think about what kind of life that baby and the mother would be forced to live. Is it fair or even healthy for either of them?

Let me give some context. On Tuesday, a division bench consisting of Justices K.K. Tated and Milind Jadhav granted the minor rape victim permission to terminate her 25 week pregnancy. The petition was filed through the victim’s father and according to the plea, the girl is a victim of rape and there is an FIR filed against her perpetrator at the Vakola Police Station, Mumbai.

The victim in her plea seeking permission to undergo an abortion has said that her mental and physical well-being are at risk.

Usually, the provisions made in the Medical Termination of Pregnancy Act do not allow a woman to get an abortion after 20 weeks of her pregnancy. To do so, she must seek the permission of the higher courts.

Before granting permission though, the court, just last week, ordered the victim to appear before a medical board of the KEM hospital for an examination. The report of that examination was then presented in court.

The medical board, advised against terminating the pregnancy. They said that if the pregnancy is continued, a healthy baby would be born and then the petitioner could decide if she wants to keep the child or give it up for adoption. The board also said that with psychological counselling, the girl would be able to take care of the baby.

Despite this report from the medical board, the bench said that since this pregnancy was the result of rape there is no doubt that continuing it, “is causing a grave injury to the mental health of the petitioner”.

And therefore they granted the 17-year-old rape victim permission to terminate her 25-week pregnancy.

Also Read: A Judge In The Karnataka High Court Said It Was “Unbecoming” Of A Woman To Fall Asleep After Rape. That’s An Extremely Poor Choice Of Words

A division bench of Justices K.K. Tated and Milind Jadhav gave the order on Tuesday while hearing the girl’s petition filed through her father, seeking permission to undergo medical termination of her 25-week #pregnancy https://t.co/HLJIvVY4Wt #BombayHC

Of course, the crime committed against this young girl is horrifying. Though, it made me think whether this case was the first of its kind or was there similar instances earlier. So I went back and dug around a little and as it turns out this case also has some precedence. In 2017, the Supreme Court granted permission to a 13-year-old rape victim to abort her 32 week pregnancy.

In May, Rajasthan’s High Court said that the fundamental right of a minor rape victim’s to abort her pregnancy “heavily outweighs” the right of the foetus to be born.

Though India’s rape statistics are off the charts, our abortion laws allow pregnancies that have resulted in rape to be medically terminated. But those above the 20 week limit have to go through higher courts to do so. There are countries around the world that don’t even consider abortion no matter what caused the pregnancy.

In Ireland, for instance, if a victim of rape or incest were to seek out an abortion she could face up to 14 years in prison. Of course, we all know abortion has been a seriously debated matter in the USA and while the general law is that a woman has the right to abort, certain states have their own abortion laws in place. Alabama’s abortion ban, for example, does not make exceptions for victims of rape or incest, and though women would not face jail time, doctors who perform the procedure outside of these strict legal parameters could face up to 99 years in prison.

Abortion laws around the world need some serious reworking. Victims of rape especially minors should not have to suffer through a pregnancy that will harm her mental well being as well as the child’s.

It’s amazing that India’s abortion laws are taking rape victims mental health into consideration. Although in our country, more than the law it is social pressure, the practice of victim shaming and character assassination that prevents women from getting an abortion, even if the pregnancy was the result of rape. For too long, women and even minor rape victims have suffered in silence because society always decided for them.

Having said that, this is a step forward in the right direction.