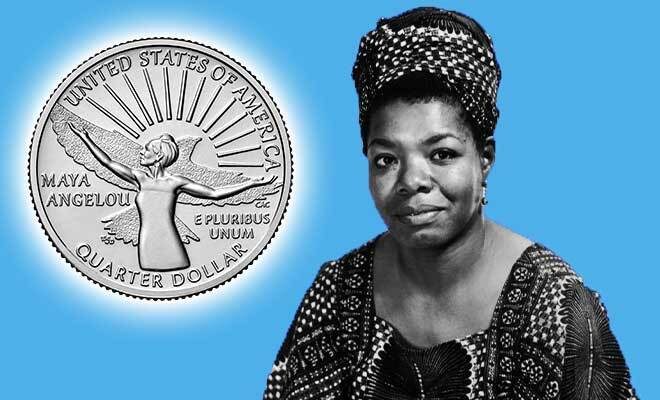 As a student of literature, we were taught about the struggle different women had to go through to get even an ounce of recognition as women. We were taught about black feminism and all the oppression black women had to go through for being from one of the most marginalised communities. I remember reading Toni Morrison, Bell Hooks, and Maya Angelou as we analysed texts like Sula, Ain’t I a Woman: Black Women and Feminism, and And Still I Rise while studying all the struggles and atrocities of the black community and black women as a whole. However, there are slow reforms being made where black women are finally getting the recognition and respect that they deserve. Writer Maya Angelou has become the first black woman to feature on a US coin.

The first few coins from the American Women Quarters (AWQ) Program have been shipped and they’re quarters featuring writer Maya Angelou, manufactured at the Mint facilities in Philadelphia and Denver. “Maya Angelou’s writing and activism inspired countless Americans and her legacy helped fuel greater fairness and understanding across our nation,” Senator Catherine Cortez Masto said, “This coin will ensure generations of Americans learn about Maya Angelou’s books and poetry that spoke to the lived experience of Black women.”

The coin has been designed by Artist Emily Damstra from the United States Mint Artistic Infusion Program and sculpted by Artist Craig A. Campbell from the United States Mint Medallic. The design features Angelou with her arms in the air along with a bird in flight and the rising sun behind her which are inspired by her poems and the way she lived. The inscriptions on the coin say Inscriptions are MAYA ANGELOU,” “UNITED STATES OF AMERICA,” “QUARTER DOLLAR,” and, “E PLURIBUS UNUM” (translates to: “Out of many, one.” Motto of the US), according to reports.

Maya Angelou was a prominent black woman writer, activist, performer and teacher. Angelou rose to prominence as a writer with her popular novel I Know Why the Caged Bird Sings which talks about the aftermath of rape and racism. At the age of 7, Angelou was raped by her mother’s boyfriend. The rapist was later beaten to death and it is alleged that Maya’s uncles were behind his death. The trauma of being raped and seeing the rapist dead rendered Angelou mute for six years, which was when she turned to writing. Maya Angelou was a recipient of 30 honorary degrees and had more than 30 best-sellers. In 2010, Barack Obama presented Maya Angelou with the Presidential Medal of Freedom and she was also awarded the Literarian Award in 2013. Angelou passed away in 2014 at the age of 86.