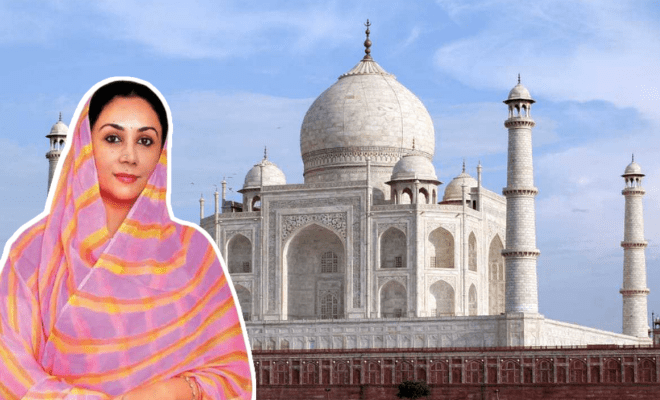 After all the things that politicians have said, here’s one that is random and somewhat absurd if you ask me. What am I going on about? Well, the BJP MP Diya Kumari, who is a member of the Royal Family, recently spoke to the media when she claimed that the land on which the Taj Mahal was built originally belonged to the Jaipur Royal Family and also went on to say that they had a palace built on that same land before. She further added that she even has documents that verify what she is saying.

On Wednesday, Diya Kumari, who is a part of the Royal Family and also the BJP MP, spoke to the media in Jaipur and claimed that the land Taj Mahal was originally built upon belonged to the Royal Family. She went on to say that she is glad that someone has appealed to open the doors of the Taj Mahal so that the truth comes out.

Diya Kumari said, “Even today if a government acquires any land, it gives compensation in return for it. I have heard that he had compensated, but at that time there was no law to appeal against him or do anything against him as he was the ruler at that time. Now it is good that someone raised their voice and filed a petition in the court.”

The BJP MP further added that if any documents are required to verify her claim then they can find them in the record room of trust of the former Royal Family of Jaipur. Diya Kumari stated that if the court will ask for the documents she will present them and it is those documents that will make it clear that it was their property that Shah Jahan acquired.

As per reports, when she was questioned about whether there was a temple there, Diya Kumari said that she hadn’t gone through all the documents yet but the property surely belonged to her family.

Also Read: Husband Builds A House That Is A Replica Of Taj Mahal For His Wife. Waah, Kya Pyaar Hai!

Diya Kumari further went on to say that she doesn’t know if the petition will be moved in the court on behalf of the former Royal Family of Jaipur, but they are looking into it now and will decide upon what steps they should take next.

BJP MP Blames Aamir Khan for ‘Population Imbalance’. What Even?