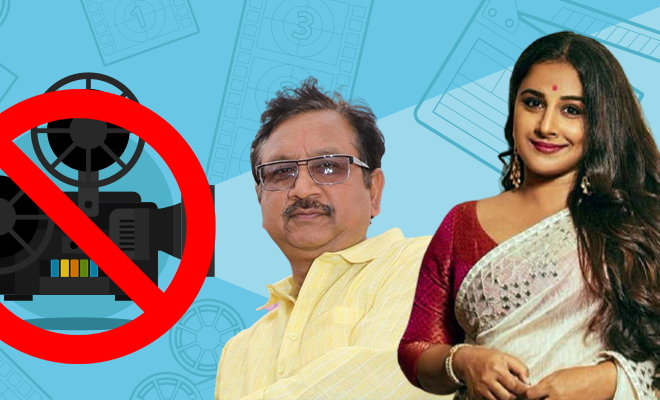 Like oil and water, Apple and Microsoft, if there are two things that just don’t mix well together, it is men and rejection. Born with inherent entitlement, often men are deemed entirely incapable of accepting defeat or rejection (in whatever capacity), thanks to the patriarchal society we’ve been raised in. And so men have been taught to retaliate against the possibility of being turned down. Whether it is in matters of love, lust or profession, the fact that a woman, a seemingly lesser gender, dared to refuse them and their advances is a direct hit to their fragile male ego, one that they protect with absurd reactions. Like Vijay Shah.

Just like this BJP Minister from Madhya Pradesh, Mr. Vijay Shah asked Vidya Balan to have dinner with him and when she refused, ensured that the permit to shoot her movie was cancelled.  Why, you ask? All because he like several other men out there, did not know any better than to be butthurt and act spiteful.

What is even more irksome in this scenario is that these are the kind of men we elect to rule our nation, when they can’t so much as accept a woman’s decision with grace, without creating a big scene and making sure that the woman pays for not offering her consent.

This BJP minister wanted to have dinner with Vidya Balan.
When she refused, he stopped the shooting of her movie and cancelled their permit.

Also Read : Hindi Film Actress Malvi Malhotra Was Stabbed Thrice By A Man Whose Advances She Rejected. When Will Men Learn To Handle Rejection?

This is the case with Vidya Balan, who is a celebrity.
How will he behave with some other vulnerable woman who comes into his ambit?
And predators like these become Ministers…
Disgusting!

Meanwhile, twitterati has reacted to the news in boiled blood and rightly so, as users drop comments like, “This is the case with Vidya Balan, who is a celebrity. How will he behave with some other vulnerable woman who comes into his ambit? And predators like these become Ministers… Disgusting!”.

Another user wrote, “This is the real character of a Nobel called Minister, then how can they support hard and fast bill against Rape.” Meanwhile people are also referring to Mr. Vijay Shah as a pervert, whereas for us it comes as no surprise that yet another man took a woman’s choice so personally, that he had to employ unfair means and create problems for her on the professional front.

Shame on the men out there who think they are entitled to having all of their wishes comes true, without taking into consideration what a woman would want. Men have been allowed to exercise their male privilege and entitlement for far too long, and if such antics keep on getting promoted, the world will never be able to become a better place, at least for us women. We are not obligated to offer anyone our acceptance if we don’t wish to, and that’s that. Not if you’re our husband, our boyfriend, our friend or even a goddamn minister. No means no, and men need to deal with rejection better than that.

Also Read : This Man Murdered This Woman Because She Refused To Have An Illicit Affair With Him. Why Can’t Men Handle Rejection?