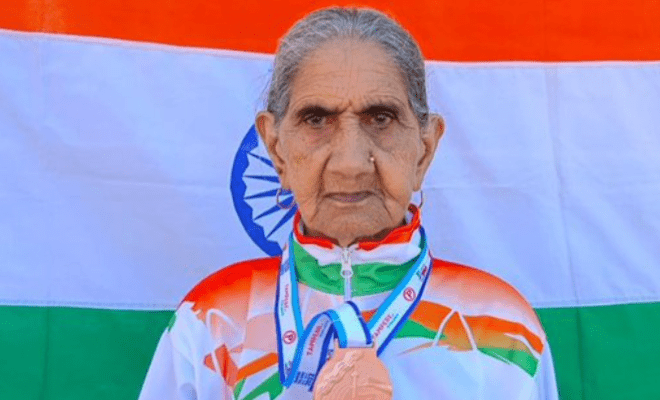 94 YO Bhagwani Devi Dagar Won 2 Bronze Medals At The World Masters Athletics Championships. She Is Making Us Feel Old!

“I am too old for this.” if you think that this is something my parents who are in their 50s or grandma who is in her 80s says often, you are highly mistaken. This phrase is commonly used by the youngest member of the household, 24-year-old me. So you can imagine how done I am pretty early on in life. And this 94-year-old woman has now given me an immense inferiority complex and shocked the globe with her accomplishment. Bhagwani Devi Dagar has not only set an admirable fitness target for many but has also made India proud on a global scale.

Bhagwani Devi Dagar won gold and two bronze medals for India yesterday at the World Masters Athletics Championships 2022 in Finland. Dagar completed the feat in 24.74 seconds during a 100-meter sprint. The senior athlete also won the bronze medal in shot put. Her admirable accomplishments have astounded netizens, who have taken to social media to show their support for the 94-year-old. Dagar’s photos with the Indian shirt and medals are going viral on the Internet.

Also Read: Sania Mirza’s Father Says They Wanted To Tell The World That A Woman Can Have Big Sports Career Even After Childbirth

India's 94-year-old #BhagwaniDevi Ji has yet again proved that age is no bar!

She won a GOLD medal at the #WorldMastersAthleticsChampionships in Tampere in the 100m sprint event with a timing of 24.74 seconds.🥇She also bagged a BRONZE in Shot put.

Many many Congratulations to Bhagwani Devi Dagar ji for winning a gold & 2 bronze for India at World Masters Athletics championships 2022 in Finland.

She is truly an inspiration for millions and proved that why one shouldn't stop chasing their dreams.

My humble Pranams to her. pic.twitter.com/8sEsrliOoD

Kudos to Bhagwani Devi Dagar Ji for winning a gold and 2 bronze for India at the World Masters Athletics championships 2022 in Finland, yesterday at 94 years of age! pic.twitter.com/MznbJwDn7L

94 years young Bhagwani Devi Dagar ji from India astonished everyone by winning the #goldmedal in the 100-meter sprint at World Masters Athletics Championship 2022 in Tampere, Finland

Dagar is from Khidka in Haryana. Vikas Dagar, her grandson, is an international para-athlete who also has received the Rajiv Gandhi Khel Ratna Award. Agar is not Haryana’s sole senior athlete. Rambai, 105, of the state, enchanted the nation last month when she established a record in the 100-meter event at the National Open Masters Athletics Championship in Vadodara. Rambai said in an interview with the Times of India that her strength comes from “roti, churma, and doodh.” The woman claimed to drink 500ml of pure milk twice a day and eat bajre ki roti with some rice.

This Woman Wore A Gold Mangalsutra So Big, The Cops Came Looking