Bhageerathi Amma, The 105-Year-Old Woman Who Gave Her Grade Four Examination Last Year, Will Be Honoured With The Nari Shakti Puraskar. We Are So Inspired. 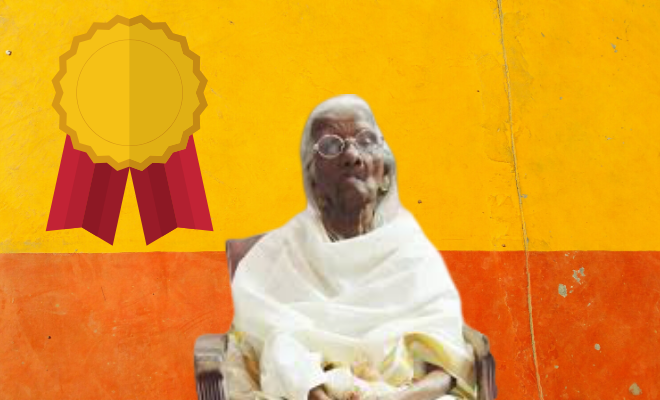 If you think about, like really sit down and have a think, you will realise that your mother or grandmother aren’t very educated but they are still grappling with the realities of today. My grandma is studied till the third grade. After that, her family made her give it up because they couldn’t afford to educate two children and obviously, her younger brother’s education was a priority over hers. This was how it was in the early 1900s. Women were trained to do household things and educating them was considered not very important at all.

Obviously, you know that is not the scene anymore, in the last 100 years the world has moved on by leaps and bounds. Women are stronger, highly educated and they make up 48% of India’s workforce which you have to agree, is amazing. But my grandmother continues to live her life like nothing has changed. She refuses the advent of technology, believes that turmeric and honey can cure just about any health issue, and of course she believes in the conventional gender roles which is what was taught to her. I just realized I am describing literally everyone’s grandma, so let me ask you this- will your grandmother be willing to restart her education again? I know mine would just laugh at me if I asked her.

However, if you’ve been following Hauterfly then you know that there is an exception. Yes, I am talking about Bhageerathi Amma. The 105-year-old woman from Kollam, Kerala who decided to reboot her education and appeared for the fourth-standard equivalent examination back in November of 2019. Like we have already mentioned in a previous story, making us all so proud, Amma cleared the examination held by the State Literally Mission with flying colours.

Also Read: This 105-Year-Old Woman From Kerala Cleared Her Class 4 Exams And Scored Full Marks In Math. We Love This

Kerala: 96-yr-old Karthiyani Amma (pic1) who scored 98/100 marks in 2018 and 105-yr-old Bhageerathi Amma (pic2) who became the oldest equivalency course student of Kerala State Literacy Mission, to be jointly awarded the 'Nari Shakti Puraskar 2019' by the President on March 8. pic.twitter.com/EL0YT9MWBI

To know that she created history by being the oldest student to ever take the exam is extremely heartwarming and inspiring. Overall, she scored an amazing score of 205 marks out of 275 and she got full marks in mathematics!

In February of this year, she made headlines and PM Modi even mentioned her achievement on his radio programme, Mann Ki Baat. Now, Amma has been chosen for the Nari Shakti Puraskar 2019. Along with her, 98-year-old Karthiyani Amma, another equivalency learner from Alappuzha, Kerala, who topped the literacy examination in 2018 has also been bestowed with this honour. In 2018, she was selected as the Commonwealth of Learning Goodwill Ambassador as a way to inspire more elderly women to restart their education.

President Ram Nath Kovind will officially bestow them with this honour on 8th March, International Women’s Day at a function in Delhi.

Also Read: Ruby Malik Is A Girl From The Slums Who Has Now Become A Judge In Jharkhand. This Is Her Inspiring Story

The Nari Shakti Puraskar is touted as the highest civilian award which honours individuals or organisations who have done excellent work towards women empowering women. It is given by the Ministry of Women and Children and the award carries a 1 lakh cash prize and a citation. Amma was nominated for this award by Kollam’s collector B Abdul Nasser and it will be a recognition for the state’s literacy mission.

When I came across this new update in the story, I felt so inspired. These two women have seen so many obstacles and hardships in their life. Now they out are there, living their best life and getting the education they were deprived of. In fact, Bhageerathi Amma is so motivated that she dreams of one day appearing for the 10-standard equivalency examination. They really deserve this and I am hoping this will inspire more women to complete their education.

Clearly, there is no age limit to learning new things!