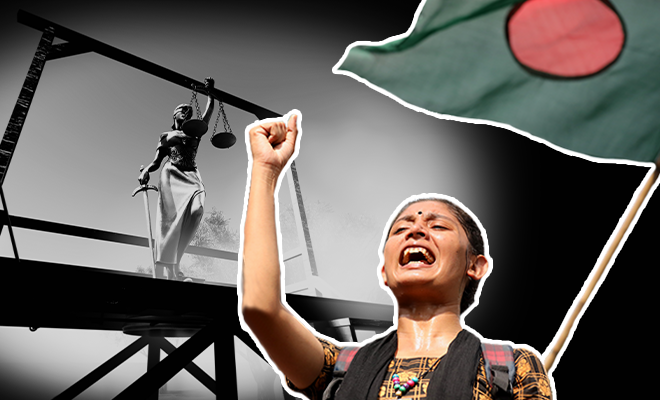 It has always been established that ‘change is the only constant’, I have come to experience that it is not likely the case when you are a woman and the change you’re hoping for is related to your own safety and well-being. In fact, for women, the saying may as well be twisted into ‘harassment is the only constant’, because well, we’ve all experienced it but it only gets worse. A sentiment that presently being shared across the globe, but particularly in the country of Bangladesh, after a series of bone-chilling sexual assaults.

A country no different than any other, where women feel unsafe no matter they’re walking down the street or the corridors of their own house, is boiling up with rage, as outraged citizens took to the streets to protest against the abysmal situation of women and their safety in the country. After a video of a woman being stripped and attacked by a bunch of men went viral on social media, people swarmed the streets, demanding the strictest punishments for rape and faster trials for rapists.

And as the national outrage in Dhaka and rest of Bangladesh kept increasing and got more intense, the needle might have budged a tiny little bit. Demands were being made of Prime Minister Hasina’s resignation for having failed the women of the country.  And perhaps it was the pressure and the looming realisation that the situation is indeed abysmal, that Bangladesh has finally taken a step to approve death penalty for rape cases.

"Rapists are [like] beasts as they exhibit their inhumane nature… we've included capital punishment for rape…we've cleared the amendment [proposal] in the cabinet," she said.#Bangladesh https://t.co/sI6EK2asgF

Also Read : Maharashtra Government To Pass The Disha Bill In The Next Session. Why Did We Need Another Rape Before They Take Action?

A decision that was announced on Monday, was after the draft of the Women and Children Repression Prevention (Amendment) Bill, 2020 was finally approved stating that anyone who shall be convicted of rape will be punished with death or “rigorous imprisonment” for life. This was put in place in Bangladesh, against the present provision that only allowed for  a maximum of life in prison for rape.

Law and Justice Minister Anisul Huq said that the presidential declaration for the new provision will come into effect by Tuesday itself. Meanwhile the police says that they have arrested eight suspects in the sexual assault case of a woman that occurred at the victim’s home in Noakhali, the very incident that sparked an outcry in the nation.

Amid unprecedented anger over rising rape cases, government weighs capital punishment for the crime by changing the law. https://t.co/FQYRXtzmqa

The citizens that largely included women students and activists, were seen rallying on the streets for days, chanting slogans like ‘Hang the rapists” and “No mercy to rapists”. And while it is good to see the government grow a spine and take stricter actions against people who violate a woman’s body like a monster, it is telling when these are the kind of protests taking place across the world. Death penalty also might not be the answer.

As a collective of women’s groups said in a statement in 2018, “The logic of awarding death penalty to rapists is based on the belief that rape is a fate worse than death. Patriarchal notions of ‘honour’ lead us to believe that rape is the worst thing that can happen to a woman. There is a need to strongly challenge this stereotype of the ‘destroyed’ woman who loses her honour and who has no place in society after she’s been sexually assaulted. We believe that rape is tool of patriarchy, an act of violence, and has nothing to do with morality, character or behaviour.”

Perhaps, a risk that we are willing to take right now but in either case, the government needs to realise that the only way they can keep the women safe, is not by allowing for harsh punishments after the crime is committed, but by preempting the crime itself. Guess, one step at a time, and for now, capital punishment seems befitting.