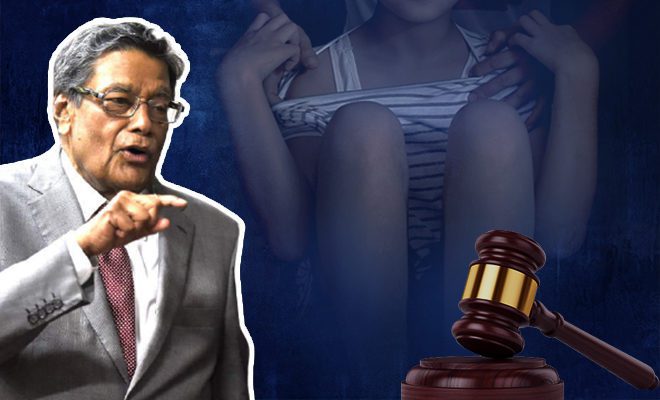 The Indian judiciary’s verdicts in the past couple of years have been a very interesting mix bag. On one end, they’ll show considerable progress by passing landmark judgements in matters of women’s safety, marriage reform and LGBTQ+ rights. And on the other, they’ll pass judgements that are tone-deaf and drag all the progress back a few years. Like the verdict passed in January by the Nagpur bench of Bombay High Court, with Justice Pushpa V. Ganediwala presiding, in a POCSO case. As per the verdict, skin-to-skin contact was necessary for an offence to amount to sexual assault under the POCSO Act. And now the Attorney-General of India, KK Venugopal, has argued in the Supreme Court to overturn this disastrous verdict.

What’s the history of the POCSO case?

On January 19, Justice Pushpa V. Ganediwala of Bombay High Court overturned the verdict of a sessions court, which convicted a man accused of pressing the breasts of a minor, for sexual assault under Section 8 of the POCSO Act. Why? Because since the act was performed over the child’s clothes, and there was no skin-to-skin contact.

The verdict read, “As such, there is no direct physical contact i.e. skin to skin with sexual intent without penetration. The act of pressing breast can be a criminal force to a woman/ girl with the intention to outrage her modesty.” The accused was thus acquitted under Sec. 8 of POCSO and only convicted for minor offences.

The verdict had caused massive outrage on social media, with many calling out Justice Ganediwala’s verdict as being ridiculous, and poking several loopholes in the logic that you’d need skin-to-skin contact for it to be a sexual assault. The National Commission for Women filed an appeal of its own against this judgement.

A few days after the verdict, on January 27, the Supreme Court put a stay order on the Bombay HC order. Earlier in this month, the Supreme Court also appointed senior advocate Siddharth Dave as an amicus curiae (someone who offers expertise and assistance to the court in the matter from an impartial position).

What did the Attorney General say?

On Tuesday, an SC bench comprising Justices UU Lalit and Ajay Rastogi heard arguments made by Attorney General KK Venugopal. He urged the honourable Supreme Court to reverse the impugned judgement in the POCSO case, stating that the then judge, Justice Ganediwala, failed to anticipate the far-reaching consequences of passing such a verdict. He called it a ‘dangerous and outrageous precedent’. Furthermore, he cited a possibility that many people even on social media had anticipated as a loophole that could let possible abusers slip from the clutches of the law on a technicality.

“If tomorrow a person wears a pair of surgical gloves and feels the entire body of a woman, he won’t be punished for sexual assault as per this judgment. This is outrageous. Saying that skin-to-skin contact is required would mean a person wearing gloves getting an acquittal,” said AG Venugopal.

We don’t know yet, as there’s a final hearing to be held on September 14, where plea against another judgement of Bombay High Court—one which observes that acts like ‘holding the hands of a minor’ or ‘opening zip of the pant’ does not amount to sexual assault under the POCSO Act—will also be decided upon.

We’re just glad that some sense has prevailed and as the AG put it, this ‘dangerous precedent’ is being taken down.