Asha Parekh Revealed How She Loved, Lost And Never Got Married. We’re Not Crying, You Are. 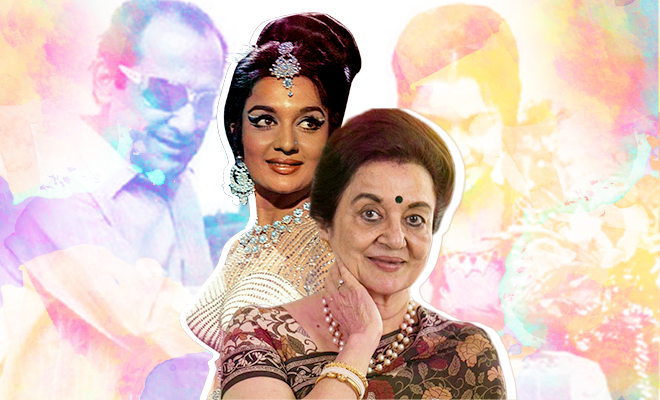 I am a millennial and perhaps that is why I relate to our generation on several levels. Like the part where, we want instant gratification, we are focused on our careers but also believe in living life to the fullest. Or the fact that our generation doesn’t compromise well, and our patience in handling diluted relationships is becoming dimmer by the second. All things that somewhere resonate with us. But what I don’t relate to is the way we love or find love. It seems like all of us are out there in the dating pool, pretending to be heartless, but are we really? Deep down we are passionate but we keep all our feelings locked away because nobody wants to get hurt. And the fact that we protect our hearts with such security measures show that we care and we care a lot, no matter how unwilling we are to show it.

I, on the other hand, believe in loving and expressing myself uninhibited. But then again, the kind of love people had long before we were even born was completely different. It was the kind that inspired sonnets and felt like straight out of a Shakespeare literary work. So recently, when yesteryear’s sweetheart Asha Parekh opened up about how she loved Nasir Hussain selflessly, it made me wonder – where is this kind of love today?

She revealed why she decided to be single all her life and the answer will make you want to cry. “I know I admitted to being in love with Nasir Hussain in The Hit Girl, but as much as I loved him, I could never consider breaking up his family and traumatising his children. It was far simpler and satisfying to be on my own,” she said in an interview with Verve.

Today, several youngsters are of the intention to never get married and it seems like the institution is gradually losing its sheen. But Asha Parekh wasn’t someone who didn’t believe in marriage even though she never really got down to it. “Make no mistake, it wasn’t like I didn’t want to get married. In fact, my mother was very keen on it and had even assembled my trousseau in advance. I met my share of boys but the end result was always the same – they weren’t the right kind of men for me,” Parekh revealed.

“Over time, my mother also gave up her dream of seeing me as a bride because whomever she showed my horoscope to would say my marriage wouldn’t be a successful one. It was not the kind of thing I believed in, but it did grant me some semblance of peace,” she further added.

Asha Parekh also spoke about the changes she sees in the way people love today, and I can’t help but agree albeit sadly. “Today, people are falling in love and getting out of it without so much as a decent conversation about it because they don’t have tolerance. Marriage is not all rainbows and butterflies; you have to give in to your partner’s whims every now and then, and that’s a two-way street. I feel that today’s youngsters burn out too fast and call it quits over trivial issues, which shouldn’t be the case,” the 77-year-old actress said. It’s so true – a relationship can’t be built without compromises, from both the partners. But we as a generation, do not want to lose our independence. Only a fragment of this old-fashioned romance is left with just a few millennials carrying on the legacy of passionate love, and we hope over time we learn how to love, again.

ALSO READ: Hema Malini Opens Up About Becoming Dharmendra’s Second Wife And Says She Never Wanted To Take Him Away From His Family

“People mistake the thrill of an early love for a relationship that is capable of braving storms and get disillusioned when they find out that their partner isn’t perfect. Polygamy is becoming quite commonplace today and for someone like me who believes that love is eternal and all-encompassing, it is quite shocking. Maybe we are evolving as a species or maybe we’ve just forgotten how to love,” she said. Here’s hoping, we remember while there is still time.