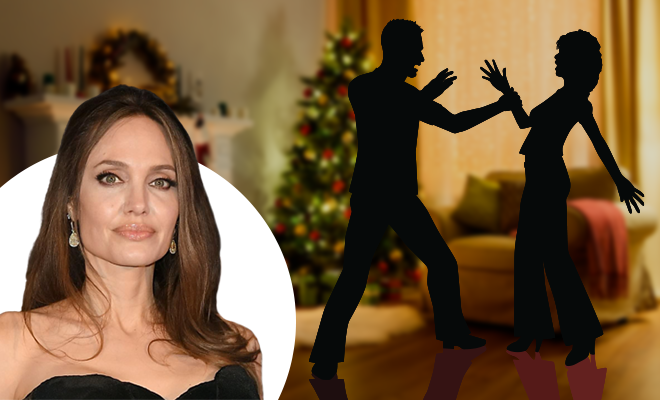 Contrary to what many people think about actresses, often reducing them to just their looks and the industry they work in, some of them have emerged to be not just great actors, but also great and kind human beings. These people channel their stardom, putting it to good use by raising awareness about important issues  and opening up critical dialogues about causes they believe in. One of them being Angelina Jolie and her initiative to prevent domestic abuse.

Speaking up for women that often face abuse during the holidays (as supported by studies that have indicated how stress of shopping, planning finances and increased partake in  alcohol can aggravate aggressive personalities in partners), Angelina Jolie as part of her Special Envoy duties with United Nation’s for its 16 Days of Activism campaign, told Harper’s Bazaar magazine that women must ‘talk to someone, try to find allies and be connected for emergencies’ to save themselves of abuse during this time.

She said, “For example, you can agree on a code word with a friend or family member, which tells them if you are facing an emergency. Begin to build a network and gain knowledge.” And from where we’re looking, this seems like advice worth holding on to. This wasn’t the first time Angelina Jolie was making strong statements either, for she has earned a reputation of standing up for women’s rights and issues in the past.

Today's Post: Angelina Jolie Has Some Advice For Anyone Experiencing Abuse

Angelina Jolie has always had a passion for raising awareness regarding social issues. Recently she gave advice to those unfortunately fearing abuse during the Christmas season ❤️https://t.co/w29meX2nVM

Also Read : Domestic Abuse Cases Increase In India As Women Are Being Beaten Up By Their Frustrated Husbands In This Lockdown. Women Are Not Punching Bags, This Has To Stop.

She also went on to share that, “It’s sad to say, but you can’t assume all friends and family will always want to believe and support you. Often it will be strangers who help. Or other victims, support groups, or faith groups. Only you really know the danger you are in, and until you find your support outside, you may feel quite alone.”

Angelina Jolie even urged people, in whom others may confide to understand their position and help them out. She said, “Try to understand the huge emotional, financial and legal pressures they are likely facing, including the pressure to stay silent about what has happened to them. And be aware that they may well be suffering trauma and PTSD.”

Angelina also advised people to stay educated and aware on the matter. “Another thing we can all do is educate ourselves. Learn about domestic violence. Learn how trauma affects our health and can lead to biological changes, particularly in children. Take these issues seriously,” she added.

Considering how the number in domestic abuse cases has spiked across the world over the course of the pandemic, it is important that more people come up like Angelina Jolie just did, and do their bit in creating awareness. We laud the actress for her efforts and hope that women everywhere can find some respite from what she said.

Also Read : Poonam Pandey Going Back To Her Husband A Week After Filing A Domestic Abuse Complaint Against Him Sets A Horrible Example.