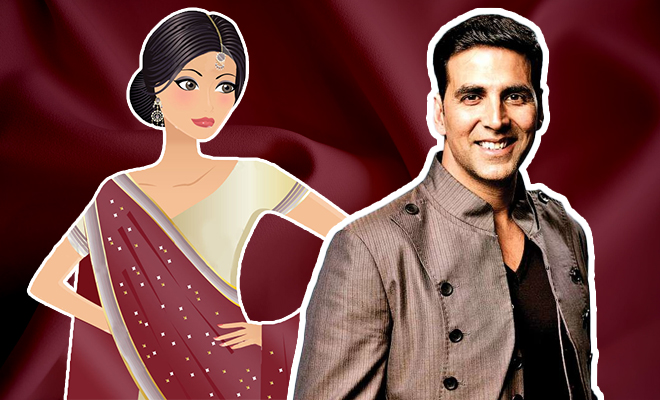 Akshay Kumar Says Wearing A Saree For Laxmmi Bomb Was Tough. He Was All Praises For Women Who Do It With Ease

I’ve grown up watching my mom wearing a saree and pulling it off with ease. That made me believe that handling it was a piece of cake. In my defense, it did seem like an innocent lightweight, airy piece of fabric. My bubble was popped when I had to don the same seemingly no-fuss outfit for my farewell in school. Spending even a couple of hours in it was a nightmare, something that had more to do with me because I didn’t know how to handle the pleats and myself at the same time. Of course, I looked gorgeous, so that was the most important thing.

Turns out, Akshay Kumar shared the same sentiments while shooting for Laxmmi Bomb. For those of you who don’t know, he is playing a man who is possessed by the ghost of a transgender person in this horror-comedy which is all set for a digital premiere on Disney+ Hotstar soon. He dropped the first look of the film in April where he was dressed in a red saree to introduce his character.

Talking about his new avatar and his experience of wearing the saree for the intensive role, he told Mid-day, “It was simply graceful to wear a saree for Laxmmi Bomb. It was an experience. However, it was extremely difficult for me to handle the saree. My stylist would help me out after every shot.” Well, that’s life for most women in India and they make it seem so easy, don’t they? “We see women in our daily lives who wear a sari and catch buses and trains, go about their daily routine without the pallu even budging an inch. I couldn’t even walk in a sari, it was quite an experience for me. Hats off to how women manage it”, he added.

Also read: Akshay Kumar Is Dressed In A Saree In A Still From Laxmmi Bomb. Will This Be Another Failed Attempt At Representing The LGBTQ Community?

He has said that it was the most challenging role he has done till date.  “It is one of the most difficult characters I have played. I had to internalise the character and get the body language right.” He also said that he had to give many re-takes while shooting for this role. “Usually, I am not someone who goes in for many re-takes but for this one, I was happy to give as many re-takes because I wanted to get it right and have the maximum acting potential show through. I was genuinely excited about each day on the sets and shooting this project.”

I will admit that he did an amazing job looking the part, though. He pulled off the nine-yard beauty like a pro and looked stunning. I mean, I still stumble and (almost) fall even after wearing it for a few times over the years now. He told Mid-day that he did eventually get comfortable wearing and handling the saree and had no problem shooting. Good for him! He even said that you should try wearing a saree in order to truly appreciate it.

Not only did he master the art of pulling off a saree, but he said that playing the role of the transperson, or actually the ghost of a transperson, gave him a better sense of gender equality. He said, “Playing this role has definitely given me more understanding of gender and gender equality and also given me more lessons to not be ignorant about people around us.” Well, if it takes wearing a saree to be more sensitive about gender equality and truly respect people, maybe everyone should try it. Just saying!