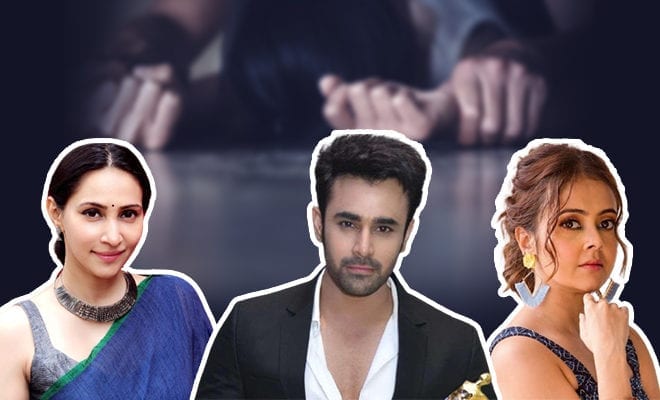 Actor Pearl V Puri Has Been Arrested For Allegedly Raping A Minor Girl. Actors Have Spoken In Support And Against. Here Is The Timeline

If there is anything we’ve learned from Sushant Singh Rajput’s untimely demise and the way his case was handled, or should I say mishandled, it’s that media can truly sway the way we perceive things. But this article isn’t about Sushant Singh Rajput or Rhea Chakraborty. It’s about another actor and the severe allegations that have been levelled against him which have, once again, turned into a media circus. If you’ve been paying any attention to anything other than COVID, then you already know that I am talking about Pearl V Puri. The actor who has been accused and now arrested for raping a minor girl. Sexual assault, on a child that too, is not an allegation that can be thrown around casually. There are too many lives at stake.

Before we get into who has said what about the Pearl V Puri case, let me give you a little background.

The Mumbai police arrested the actor for allegedly raping a 5-year-old girl. On Saturday, a sessions court sentenced Pearl to 14 days in judicial custody. According to numerous reports, the incident took place on a film set in October 2019. The victim is the daughter of another actor working on the same set. While the information that is being reported isn’t consistent, we do know that the police complaint accusing Pearl was sexual assault was filed by the victim’s father. Based on this complaint, Pearl has been charged with Section 376 AB (rape of woman under 12 years of age) of IPC and relevant sections of the POCSO Act.

All this seems quite straightforward, doesn’t it? But it isn’t. In fact, this case has more twists and turns than we can count. You see, a while after Pearl was arrested for sexual assault, famed producer Ekta Kapoor took to her social media and came to his defence. She said that the allegations levelled against him are false and that she has voice notes from the victim’s mother backing her claim. After this post, numerous celebrities also came to Pearl’s defence but we will get to that in due course. A few days later though, a video showing the Vasai Deputy Commissioner of Police, Sanjay Kumar Patil went viral. In this video, he refuted Ekta’s claims and said that Pearl’s name had come up in the investigation and the police have evidence against him as well.

In the video, he said, “the father of the victim had lodged a complaint in Versova police station claiming that their daughter has fallen prey to sexual assault. Since the jurisdiction was from Naigaon as the shooting was happening there, the case became a zero FIR and got transferred. The actor was then booked under Section 376 A, B, and POCSO Act. We have conducted the medical examination and have also recorded the statement of the accused under CRPC 164”.

Here is where this case gets super murky. While the victim’s father has filed the complaint against Pearl and is insisting that he touched the now 7-year-old girl inappropriately, the victim’s mother is siding with Pearl and saying that she does not believe these allegations. In a phone conversation with Ekta Kapoor, that has now gone viral, the victim’s mother can be heard saying that her estranged husband, the victims’ father, is abusive and is falsely accusing Pearl to prove that she was a bad mother for working as an actor and taking their daughter on film sets.

During the conversation, the victim’s mother said, “I was married for 12 years and he (minor’s father) was abusive. Mentally and physically also.” Further adding, “I don’t know Ekta. He (the minor’s father) is putting these wrong allegations. I don’t know what’s wrong with him.” After this, Ekta Kapoor asks her flat out if she believes that Pearl sexually assaulted her daughter. To this, the mother replies, “Not at all. My gut feeling says it has not happened. And when I’ve seen her (daughter) so many times in court.. can you imagine what I’m going through. It’s been two years. It has been one and a half year I’m staying without my daughter.” She also said, “I’m with Pearl only. I’m with the truth. I have given all the statements. I have all the proofs.” The mother added that the victim’s father is “psychotic” and is brainwashing the young girl.

Basically, everyone is just airing their dirty laundry in public. This case has become a media crapstorm with everyone giving their own opinions which has sidelined the facts. Considering this case is still pending trial, we don’t know if Pearl V Puri committed the grave crime he has been accused of. And we aren’t going to waste time guessing. That being said, it’s vital that we talk about all the celebrities that have come to Pearl’s defence and how divided social media is regarding this case.

We already talked about everything Ekta Kapoor has said and done to prove Pearl is innocent. But she isn’t the only one. Actors like Anita Hassanandani, Krystle D’souza, Arjun Bijlani, Nia Sharma and many others have all said that there is no way Pearl could commit a crime this heinous. In fact, actor Divya Khosla Kumar penned a long note on Instagram claiming Pearl’s innocence. She named the victim’s parents and shamed her father for ‘mentally playing’ with his own daughter and using her for ‘personal gains’.

Talking about this case, in an interview with SpotboyE, actor Rishina Kandhari said, “It’s extremely unfortunate to hear something about someone who you have worked with. I remember how he treated everyone on the sets of our show Naagarjuna and his conduct was up to the mark with female co-stars. Thus, I don’t think that he is what people are making out of him.” She also added, “I too have a daughter and I do take POCSO very seriously. I’ve worked with many child actors in the past and I, myself have been very protective about them and their safety, if our industry would’ve been unsafe we wouldn’t have worked so comfortably staying within our boundaries. Really hope that the truth sees the light and no innocent is punished.”

Check out the posts of all the celebrities who defended Pearl:

Dear privileged Girls and Women,
Do not make the heinous allegations of rape and molestation so frivolous and casual that it ceases to hold any value for posterity.@pearlvpuri You have my support✨.

I stand with @pearlvpuri . I doubt he can do something like this ever … he is a soft spoken well behaved guy. The truth shall be out .. till then stay strong Pearl. #istandwithpearl https://t.co/PwVnNkyH3P

Some Actors Were More Balanced In Their Approach

However, not all celebrities supported the accused actor. Actor Devoleena Bhattacharjee bashed all the people defending Pearl in a series of tweets. She asked all these celebrities to go fight in the court and not drag the little girl’s name through the mud. Devoleena was especially irked by what Nia Sharma wrote. In response, she wrote “Har Ek cheez ka mazaak banakar Rakha hai. Support Karna hai na? So go to the police station, court. Go & fight there. But at least don’t get your dirty mind here to talk shit about that little girl. Blood go & do candle march there to release him (sic).”

In her next tweet, Devoleena wrote, “Your social media handles are not going to help him. But karma will surely hit back to each one of you who is cursing that little 7yrs old girl.Kaise log ho yaar tum log. Dharne pe bai tho, Bhook hartal Karo, dikhao apna support..but gandagi mat phelao…kya gandagi macha rakhi hai (sic).”

Not only Devoleena but a lot of netizens on Twitter are also torn. While some believe Pearl is innocent, others aren’t having any of it. Check out their mixed reactions:

"I know him, he can't do it" is the most baseless thing you could say. You never know what's inside a person until they choose to show it to you. Celebs can really take a back seat in this, until the judgement is out and both sides are heard.#PearlVPuri pic.twitter.com/fkcrPfcUXL

All we can do at this point is wait and hope that the truth, whatever it might be, prevails.

A Bathinda Cop Allegedly Raped A Woman And Booked Her Son As Blackmail. He Was Finally Dismissed