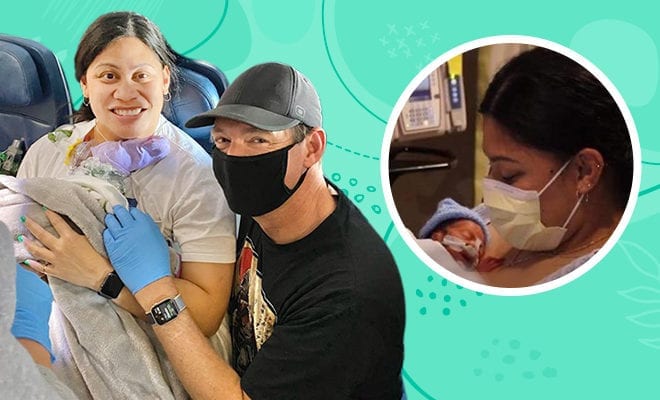 Woman Didn’t Know She Was Pregnant, Gives Birth On A Flight While Travelling To Hawaii!

I’ve always known that I want children. Three, to be precise. But the entire process of being pregnant and then giving birth freaks me out. It is miraculous, there’s no denying that, but it’s also complicated and terrifying. However, what is even more frightening is the concept of a cryptic pregnancy. It’s when a woman doesn’t know or realise she is pregnant until the very last few weeks of the pregnancy, or in some extreme cases until she gives birth. Even though it’s rare, cryptic pregnancies happen more often than you know. Merely a month ago, a woman, who didn’t know she was pregnant, thought she was passing a kidney stone but instead she delivered a baby on her toilet. If you think it’s scary to have a baby the usual way, this is a hundred times scarier. Just recently, it happened to a woman from Utah who went into labour mid-flight to Hawaii and delivered a baby in the airplane.

On Wednesday, Lavinia Mounga boarded a flight from, Salt Lake City in Utah, to go to Hawaii. Little did she know that not only was she pregnant but she would have a baby before reaching her destination. According to reports, Lavinia was just in her third trimester but she had no idea that she was pregnant. She gave birth to her son on the plane with the help of the cabin crew and a few doctors and nurses on board. Lavinia named her baby Raymond Kaimana Wade Kobe Lavaki Mounga.

A TikTok video made by a fellow passenger documenting everything went viral on social media. It revealed that a baby was just born in that flight and showed everyone cheering and the cabin crew helped the woman. They asked everyone to remain seated as the mother the baby needed some special medical attention. After they landed, Lavinia and her baby were taken to a hospital in Honolulu.

Also Read: This Woman Didn’t Know She Was Pregnant. Thought She Was Passing A Kidney Stone, Delivered A Baby Instead

A nurse named Lani Bamfield, who was on board and helped Lavinia deliver the baby, said in a Facebook post, “We delivered a 26-27 weeker in the airplane bathroom, in the middle of the ocean, with three NICU nurses, a physicians assistant, and a family medicine doctor we were able to make it THREE HOURS before we could finally land but the baby and the mother are doing great. God is definitely above us.”

Can you imagine not knowing that you’re pregnant and having a child suddenly? It’s just downright terrifying. Obviously, Lavinia was grossly underprepared and hence, her sisters started a GoFundMe page and asked for donations. This money will help Lavinia as she stays in Hawaii until the baby gets better.

As bizarre as this is, all that matters is that the mother and the baby are healthy and happy. At least, this baby has an amazing birth story!