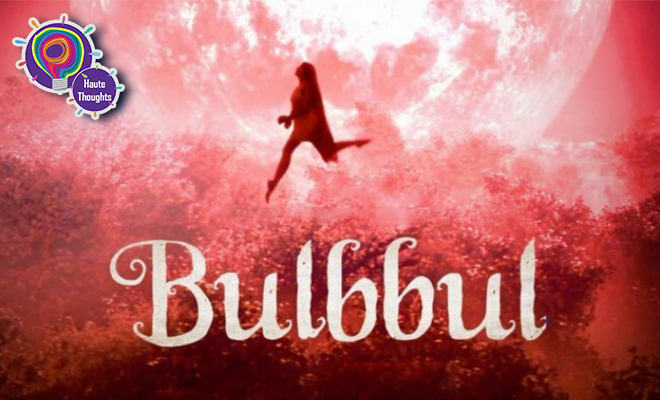 5 Thoughts I Had About Anushka Sharma’s Bulbbul Trailer. Mainly, How Eerie The Whole Trailer Is

I have said this time and again and I will say it once more, I absolutely love myself a good horror movie. But, unfortunately, those are extremely hard to come by and especially when Bollywood does it. Mainly because they often end up confusing the genre of horror for a comedy drama and predictable plot twists, but not this time. Today, I was really excited since Anushka Sharma’s Bulbbul trailer was to come out. You know the same movie whose moving poster had really freaked people out? Yeah, I hate to spoil for you but that was done on purpose.

The thing is, Anushka’s former horror movie Pari was really good so I am very excited to watch Bulbbul. And considering, I don’t say this often when it comes to horror movies, this one looks super promising. So, just a warning don’t watch it if you can’t handle jump scares, flying chudails and super creepy havelis.

Here are 5 thoughts I had while I watched the trailer.

PS: Before reading on you must watch the trailer below:

1.For far too long, Bollywood’s version of horror movies was pure garbage. We had horror movies like Ek Thi Dayan for crying out loud. Though after watching the trailer for Bulbbul I can say for sure that the advent of OTT platforms has really helped the horror genre step up its game. That trailer has all the elements of a good horror Indian movie- an old haveli, creepy characters and of course the chudail with inverted feet. It’s going to awesome, I am so pumped!

2. I know that the story that has been depicted through this trailer has been done to death but you have to admit there were moments and dialogues that were really freaky. Though they should’ve explored more into the character of the chudail to build intrigue because after the first two-three scenes we don’t see her at all. However, I really like that they have incorporated some aspects of child marriage into the story, as well. Although, that scene where there is fire all around and that man screams, made the hair on the nape of my neck stand right up.

3.While we are on the topic of screams, the one at the end of the trailer made my heart beat faster for a second. When the scene started, I thought she was having an orgasm (and I couldn’t have been the only one..). Because who else arches their backs like that in fear? Oh wait, Chudails do. But then some lady says “chup rehna” and there is a piercing scream that I was not expecting. Also, when they zoom into her face, did you all notice her expression? It was super terrifying. Maybe she saw the ghost or *insert eerie music* maybe she is the ghost.

4. If it’s not already obvious enough, the reason why I love this trailer is simple enough. It’s largely due to the constant background music that is playing well in sync with what it’s showing. People think it’s the jump scares and characters that tie a horror movie together. Those people are wrong. It’s always the background music that does the trick. It’s soft and super eerie in the right moments and super loud and frightening in the right moments. But most importantly, it’s continuous so there is no breakage in the vibe that you feel. Damn, it looks like I could do a PhD on horror movies.

5. I just have one question, why are most ghosts portrayed as women? Think about all the horror movies you have watching and just try and remember the last time you saw a movie that revolved around a male ghost. If we are making our horror movies better, isn’t it time to shake things up as well, and maybe explore beyond a chudail??

Here Are 5 Thoughts We Had About Sushmita Sen’s Upcoming Show Aarya’s Trailer. Mainly Ki, How Kickass Does This Woman Look?