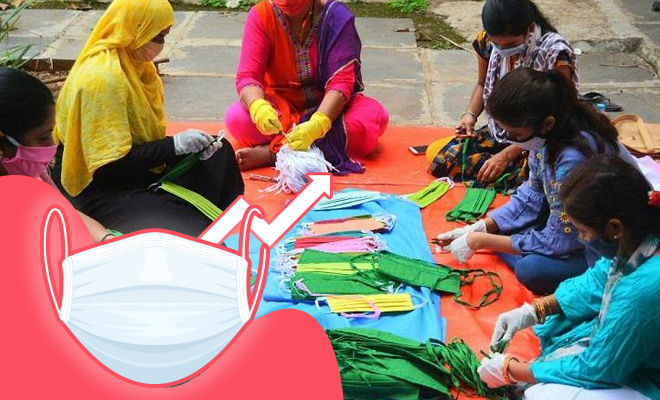 200 Women Came Together To Form A Startup Involved In Making Masks After The Male Members Lost Their Jobs. This Is Inspiring

My grandparents often recall a time in their stories, when the idea of the women of the house working to support men would be considered a mortal sin. Some would say not much has changed since then, for there are still certain parts in the country where women are looked down upon if they try to earn a living alongside their husbands. And while it’s been centuries of living with this patriarchy, it seems like this pandemic was what it took for a few people to start thinking differently.

Up until now, many families in villages would work on the same format where the wife takes care of the household and the man brings home the bread. But as we were left Corona-struck, with the global economy sinking, businesses shut down and work being scarce, unemployment and recession are the other things we have to deal with. And in a time like this is when the women have stepped up to go above and beyond their household chores and earn a living for the family.

We say this after 200 women in the twin cities of Hubballi-Dharwad, decided to come together to form a startup, where they prepared masks to supply during this time. They started this after their husbands had been laid off and they had to find a way to support the family.  These women joined hands for a new mask venture.

#INDIA #STARTUP:#HUBBALLI: 200 women in the twin cities of Hubballi-Dharwad who joined hands to form a startup that makes masks for the COVID-19 battle now find themselves deluged with orders.https://t.co/7o7K07H09P pic.twitter.com/KZprdglrkN

Also Read : 10-Year-Old Differently Abled Girl From Udipi Stitches Face Masks For Other Students. This Will Put A Smile On Your Face

With the help of the Deshpande Foundation, these women came together and worked hard, earning close to 9,000 rupees every month. They are now finding themselves swimming in large orders, which is not just joyous to hear, but inspiring to learn from as they redefine gender roles. The women are looking at registering their start-up Swavalambi Sakhi Producer Company Limited soon enough with the Union government to avail benefits.

Speaking on how the process of this mask-making comes together, one of the women shared how, “We purchase cotton and khadi clothes from local entrepreneurs and give these along with sodium hypochlorite to a team of women for washing and pressing. After washing, another team of women cuts the clothes and then hands it over to a third team to stitch. Once the masks are stitched, they are sent to the Deshpande Foundation start-up centre for sanitization. After this, they are packed and released to the market where buyers can directly use them without washing.”

The women, who have been given a training on making masks as per the WHO standards, have recently received a big order of supplying 10,000 masks, at the rate of Rs. 15 each to a Bengaluru-based organisation, that needs it for school children. These masks were first distributed to the vendors for free, to test and gain confidence on, and once they were satisfied with the product, the orders started rolling in. Guess their name and work is already getting around!

GET HAUTERFLY IN YOUR INBOX!
Related ItemsFeaturedTrendingcoronavirus lockdown200 women form mask start up200 women from hubballi form a start up to make maskscoronavirus masks