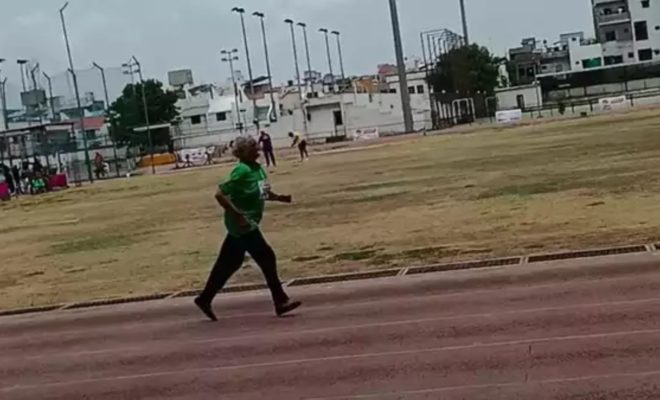 Who says old age will stop you from doing or exploring something that you love and are passionate about. And if somebody says so, then we should definitely give them the example of this 105-year-old grandma who has set a new record in a 100m race. Her story not only inspires us to keep healthy but also is proof that nothing can become a  barrier if somebody has the sheer determination and passion for something.

The 105-year-old Rambai set a new record in a 100m race of 45.45 seconds. On Sunday, she participated in the inaugural National Open Masters Athletics Championships – conducted by the Athletics Federation of India and concluded in Vadodara on Sunday. Rambai clinched a golden double in sprits, the 100m conducted on June 15 and 200m on Sunday. Rambai also shared her further plans as an athlete and said that she wants to participate in international competitions, as per reports. She also said that she has already applied for a passport.

Rambai born on January 1, 1917, ran the race alone since they were no competitors above the age of 85 to compete with her. Rambai broke the record of Man Kaur who made a record at the age of 101. Rambai also shared her healthy diet and said that she drinks 500 ml of milk twice a day. Talking about her winning diet, she said that it consists of “churma, dahi, and milk”. Rambai’s granddaughter Sharmila also talked about her secrets to achieving such a great record and said that a healthy diet and a clean village environment add to her grandmother’s fitness.

Rambai is an inspiration not only for old people but also for youth. The youth these days has a habit of giving up on passions because it requires effort. We all should learn from the 105-year-old granny!

The 5:2 Diet: Everything You Need To Know About This Intermittent Fasting Based Diet And Weight Loss