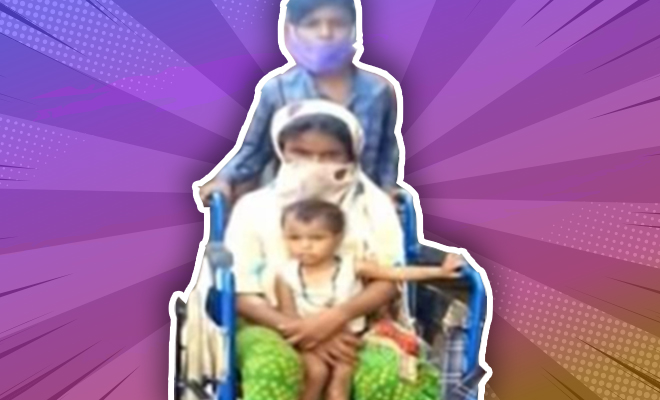 There is a popular saying that, ‘kids are a form of God itself’. This often has me thinking, but how? The version I meet of them is often poop-y, cry-y and tantrum-y and there’s nothing remotely divine about them in that time. Maybe other people meet the sweet, cute and the ones that say the darndest things. But it wasn’t until recently when I realised how much truth there could be to that old saying.

All our lives, we’ve seen our parents stretch themselves at odds and ends, going to the ends of this earth to provide for us and make us happy, but it is seldom that you see a child do the same for his parents and at the young age of 10 years, no less. Going against all odds, a 10-year-old boy living in Hyderabad pushed the wheelchair of his disabled mother for up to 350 Kms to help her reunite with the rest of her children.

The boy carried his one-year old sister in his arms alongside of pushing his mother’s wheelchair. He started walking from Bengaluru and was spotted in Kurnool, after having walked for over 350 kms. A lot of migrant workers have been travelling home during this pandemic to reunite with their families, but this would be the first time we have seen a little boy make such a tremendous effort for his mother.

Also Read : Babita Soren Dug A 15-Feet Deep Well Inside Her House So Her Mother Would Not Have To Walk Everyday To Fetch Water. She Is An Inspiration

The boy who is named Shah Rukh, was travelling with his mother Haseena and younger sister, to an ashram in Bengaluru, where the other three siblings were taken by an acquaintance before the lockdown was imposed. Thee family had lived off of begging on the streets after their father had passed away, and with the lockdown, things only got worse.

But young Shah Rukh, who wanted to help her mother in any way he could, managed to get a wheelchair from the hospital for his mother and decided to set off on foot to reach to his family. Spotted by a police officer on a dhaba near the highway, they were taken in and given food and it was those locals who further alerted the police about them, ultimately helping him reach the ashram safely.

The officer said, “Shah Rukh’s courage in wheeling his mother and sister has greatly moved me. Though he is 10 years old, his determination to help his mother reunite with her other children is moving,” and he was right. No matter how tough the times are, it shows that the human spirit and will is far greater than any pandemic.

Also Read : An NGO In Haryana Has Set Up Pad Banks To Help Less Fortunate Women While Also Educating Them About The Health Benefits. This Is A Great Initiative