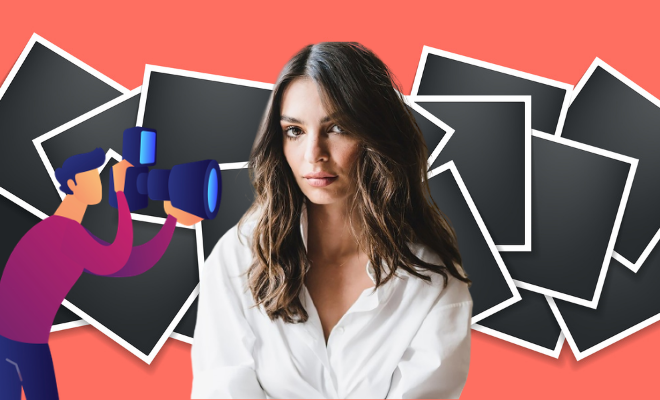 I, like most girls, have a love-hate relationship with Emily Ratajkowski’s Instagram. I won’t even need to explain it to you if you just looked at her profile. Her Instagram grid has levels upon levels of photos where she is flaunting her gorgeous body, in stunning outfits and at spectacular locations. And all of that just arouses a lot of feelings inside you—from envy to jealousy, even judgement about your own body or life not being anything like that, and definitely lots of adoration. Because it takes a different set of guts and confidence to pose the way EmRata does. And yet, when you find out goes on in the mind of the woman in question…. I woke up this morning to Emily Ratajkowski’s essay for the New York Magazine, titled ‘Buying Myself Back’, and I had a fierce respect for her.

First, Emily could write and how. Her essay chronicles past instances of being sued for using her own paparazzi clicked photos, over which she had absolutely no claim, resonate a sentiment echoed by other models like Gigi Hadid. But Emily goes beyond just pap flashes and talks about how the art world too, specifically artist Richard Prince and his ‘Instagram Paintings’ series, found a way of depriving her of any agency over her own Instagram photos. The most difficult part of her essay comes towards the end, where Ratajkowski recounts in detail how an unpaid modelling assignment morphed into sexual assault.

Also Read: The Moral Policing Of Actress Samyuktha Hegde Isn’t About Protecting ‘Indian Culture’. It’s That Women Who Do Their Own Thing Make Us Uncomfortable

However, even when it gets hard to read about her every little thought process during each of these incidents, it is Emily Ratajkowski’s stark and impactful writing that keeps you hooked. I found myself, a fellow writer, marvelling at how compelling her words were at one moment, and feeling horrified by the utter helplessness she must’ve felt the very next. Can you imagine being constantly reminded of that devastating emotion by men who exploit it for the sake of money every chance they get? The artist who used her photos exhibiting them; the photographer who clicked her nude polaroids and allegedly sexually exploited her going on to publish and republish those photos in books?

“All these men, some of whom I knew intimately and others I’d never met, were debating who owned an image of me.”

Emily’s powerful concluding lines resonated with me, and every woman who read it, because this was the only way a woman could seize the control back.

“Eventually, Jonathan will run out of “unseen” crusty Polaroids, but I will remain as the real Emily; the Emily who owns the high-art Emily, and the one who wrote this essay, too. She will continue to carve out control where she can find it.”

Twitter was abuzz with praise for Emily Ratajkowski’s writing as well as her courage to come out with these stories, and a shared empathy for how women have, are and perhaps continue to be deprived of agency by men, who stake their claim on it without so much as a second thought.

This essay by @emrata is a chilling, propulsive, and deeply important read about the myriad ways in which women are robbed of agency and ownership of their own bodies by an system bent on keeping us small.https://t.co/ylfhG8m1t5

This heartbreaking essay by @emrata is essential reading. https://t.co/AEbhIRNuaL

Reading this essay by @emrata made me physically ill, especially when you realize that her story is happening to so, so many other vulnerable young women, too: https://t.co/U73Bj155Ej

One of the best essays I've read about the liberties men take with women, ever. @emrata can fucking WRITE.https://t.co/OhJNqie0gf

Despite not being a world famous model, I’ve experienced every emotion @emrata describes and felt each dismissive statement used against her to my core.

This is a tough read for sexual assault survivors but please give it your time.

I know stories like this are not unique. Thanks @emrata for sharing yours, I have many friends sharing her powerful essay and their own similar experiences. All the Power to you Emily ♥️ pic.twitter.com/wkH6ormiKM

The Emily Ratajkowski piece is truly courageous. It’s brought home to me how wrongly dismissive I’ve sometimes felt about her and other women who appear to benefit from the ‘privilege’ of staggering beauty.I shouldn’t have needed reminding that all bodies can be hard to live in.

this essay by @emrata illustrates a certain kind of male entitlement/ownership prevalent in relationships both professional and intimate that i have always had trouble articulating. a heartbreaking, meaningful piece of writing https://t.co/7rwidelDgT

So proud of @emrata’s wisdom, ferocity and wit. Sharing writing with you and getting to read your work over coffee has been a private joy – and I’m so glad it’s now a public one. There is so much more where this came from, people.https://t.co/zKE4GX7AX5

Emily Ratajkowski’s essay also opens up a dialogue on how enabling our misogynistic mindsets can be for men who exploit women in such a manner. When people, including women, see someone like Emily, who is a model and in the business of flaunting their perfect body, they automatically assume that they are always ‘down for it’. When several female celebrities nude photos were leaked on the Internet, people were so quick to assume that the actresses would’ve taken the photos and leaked it themselves,. Or why were they creating such a fuss over it? Their bodies are flawless, and haven’t they done this before? How does it matter? As if their consent is just a free-flowing stream you can dip into anytime! And this, in turn, makes these women think that perhaps it is was their fault for perpetuating such an image about themselves to people.

reading @emrata and thinking for the 4,000th time about this @jiatolentino quote pic.twitter.com/v5kcpzj0wt

Furthermore, there’s also this barrier in our minds that prevents us from seeing that even the women who appear ‘perfect’ or ‘flawless’ to us physically, might have inhibitions and struggles that we are not aware of.

but after ready that essay she wrote for vulture, and how personal and real it was. i feel bad for anything i tried to say to tear her down so that i could somehow feel even a little bit valuable in comparison.

she might be prettier, and skinnier, and sexier, and taller, the list honestly could go on lol. but at the end of the day, she is a regular person, who has feelings, who has had real traumas, and i now feel more connected to her as a person than i did to the jealousy of her body.

just thought i’d share these thoughts, because after reading the article, i feel sorry for ever hating her because of my jealousy. we need to stop letting men pit us against other women, because at the end of the day we need to have each other’s backs.

If you were to look at the response that fashion photographer Jonathan Leder, who was accused by Emily in the essay, has put forth, you’ll understand the entitlement that men feel in such instances, all because the society enables them to dismiss women’s agency and make whatever they want of it.

Emily Ratajkowski accuses fashion photographer Jonathan Leder of sexual assault in this essay. When asked to comment, this is how he responded. https://t.co/v0Itvj56K1 pic.twitter.com/iABsfBWWoj

As one of the women on Twitter put it. Emily Ratajkowski or any woman for that matter, could be roaming naked on the street and that would still not be consent for anything—to take her photos, lech at her, touch her, or violate her.

Thank you, Emily, for these powerful words, and for reminding us that this entitlement and enabling of men has to stop.

Also Read: Guilty Or Not, Nothing Justifies The Media Mobbing Rhea Chakraborty. The Invasion Of Her Personal Space Needs To Stop