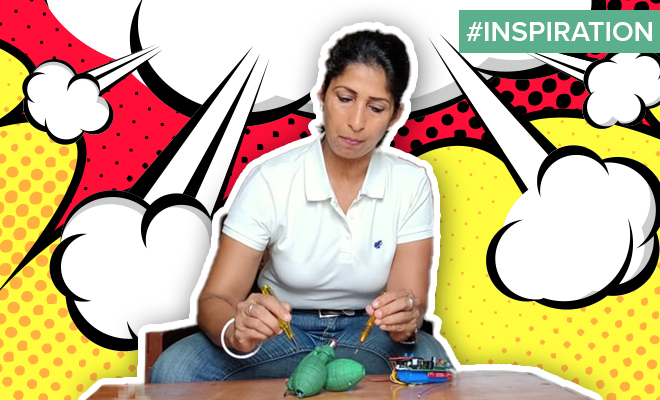 A Woman Taekwondo Expert Developed A ‘Hand Grenade’ To Help Women Feel Safe. Because Our Safety Is Still Our Problem

Before you step out of the house, you gotta be ready. And by that, I don’t mean fix-your-hair-ready, but Unagi-ready. If you are an Indian woman reading this, you know the gist of it. I mean, let’s admit it, most of us have 100 on our speed dial and at least one self-defence tool like a teeny sharp weapon, pepper spray or a killer key chain, amirite? Sadly, we have accepted the truth that if you are a woman, you can never be too safe in India.

Every now and then, police patrolling forces, CCTV security, and women-only public transport facilities are flagged off with the sole motive of ensuring safety of women. However, the stats of crimes against women are grim, showing no change. This leaves women with only one option—be armed and alarmed to avert a possible tragedy themselves. This is anyway expected of us, it’s not new. Instead of expecting men to not be the predators (which isn’t much to ask for), women are expected to ensure their own safety. Because, is there any other option even?

Keeping in mind this very thought, a martial arts expert from Varanasi has developed a personal safety gadget for women, a ‘hand grenade’ to be precise. Before you assume otherwise, it is non-explosive. Rachna Rajendra Chaurasia along with a young scientist Shyam Chaurasia, has created a compact device that saves upto seven phone numbers to alert your friends and family in the time of need and comes with a pull trigger (much like a real grenade) that produces a loud sound that can be heard a kilometre away. While this grenade wouldn’t stop a predator from approaching you but it will most definitely avert or stop the potential danger and get you help faster, which is pretty awesome.

To check the increasing crimes against women in the country, Rachna Rajendra Chaurasia who is an expert in martial art Taekwondo, along with a young scientist Shyam Chaurasia, has prepared a women-safety#OmmcomNews https://t.co/NtYYe7UWC7

Talking about how the gadget works, Rachna told IANS, “The grenade has a SIM card which can secure five to seven numbers. It will contain emergency numbers in addition to the contact numbers of the family members. It has an on-off trigger which can be pressed and thrown. Upon doing so these numbers will trace the location by which they will be able to protect the woman by reaching the location.”

The grenade is wireless and compact so you can simply toss it in your handbag and pull it out, should you feel you are in a potentially dangerous situation. Rachna added, “It is built on complete wireless technology. Due to its small size, it can be kept in a purse or in the pocket. Distance sensor has been used in this and if there are incidents like snatching of purse or mobile of women, then it will start working in active mode. This will work even if the distance breaks.”

On pressing the trigger, the device will make firing sounds to help you get help from the crowd near you, if any. “The loud sound can be heard up to a kilometre away. The firing sound catches everyone’s attention and people can easily reach the woman or young girl in distress. Using this unique grenade, the location of the incident reaches the number 112 of the police which will be live-streamed by them as well as to the registered members of the family,” Rachna added.

Also Read: Telangana Police Will Have Pro-Women Safety Clubs In Colleges. We Think This Was Much Needed

According to the experts, this gadget is revolutionary and will help ensure women’s safety in the country. The coordinator of the BHU innovation centre, Dr Manish Arora said, “This is a good innovation for women safety. Right now its prototype is being made. It has an RF and a sensor base technology. It will work at the command centre and help in helpline numbers. It is a commendable effort and needs to be introduced to the industry. Its patent is mandatory.”

The scientist, Shyam Chaurasia said, “This grenade costs a meagre Rs 650 and weighs nearly 50 gram. It works for nearly a week on an hour-long charging. It is a complete ‘Make in India’ product. No foreign material has been used to make it. A letter has been written to Prime Minister Narendra Modi regarding the same.” So basically, it fits your pocket both metaphorically and literally. He said that the device is more like an experiment to minimize and prevent crimes against women like rape and molestation which are rising in Varanasi.

If you think you’ve heard this young scientist’s name before, let me remind you of another similar safety gadget he invented a few months ago to safeguard women from potential sexual assault. He created a lipstick gun that looks like a lipstick but triggers an explosive sound and sends message to police emergency number as soon as the button is pressed. This was also an amazing compact security device that was affordable and incredibly helpful for women.

“The lipstick gun is especially for women's safety.”

In India, it’s not unusual for a woman to avoid stepping out of the house at odd hours or be afraid to board a cab without sending her live location, and calling a friend to give her ETA, or keep a number of a loved one dialled on the phone while walking a stranded street. We may have learnt to develop a sense of awareness in a public place (or a deserted parking lot, there’s no difference, really), but that’s not enough to stave off a disturbing incidents. It is safety apps and gadgets like these that could really protect you in the time of need.

While it may take some (okay, a long) time for things to change, these personal safety gadgets are life-savers, quite literally till the women are actually safe in this country. Being locked up at home for the fear of a mishap isn’t an option. Better be armed with the self-defence gadgets and take these attackers down like a boss. Because, again, is there any other option even?

Also Read: #Inspiration: An All-Women Police Patrol Unit Has Been Flagged off In Noida To Ensure Women’s Safety In Public Places. What A Great Move!