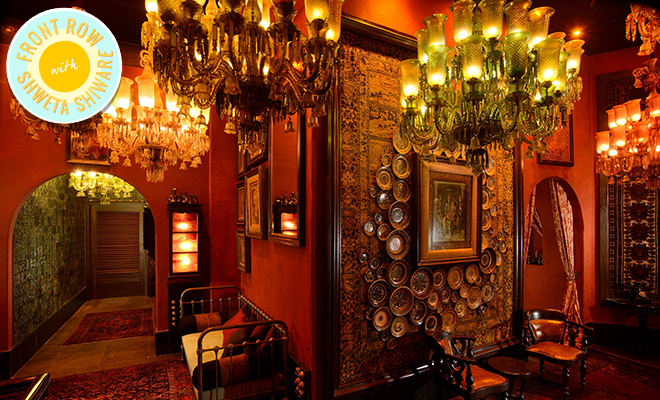 In the newly Independent India, a young journalist, Sudhakar Dikshit, relocated to Bombay from Patna with a resolve: to promote and propagate the country’s resilient arts and crafts heritage.

Around the same time, in 1946, the organisers of a Cultural Centre at 34 Rampart Road (now renamed K Dubash Marg) decided to close their books since the project had turned into an obligation. Seizing the opportunity, Dikshit decided to take on the venture, which is famously known as Chetana today.

The city saw a lot of firsts with Chetana — a cultural café focussing on vegetarian Indian food, a corner bookstore, and an art gallery providing space for the pioneers of Modern Indian art, such as MF Husain, Raza, Akbar Padamsee, and Souza.

This essentially modern approach of creating a collective ethnic identity came a full circle with the launch of Chetana Crafts Centre – perhaps, the first fashion outpost at Kala Ghoda.

The institution met its like-minded neighbour when designer Munira Chudasama launched the Golden Thimble fashion boutique there almost 50 years ago. “My mother started Golden Thimble when there was no fashion culture. Back then, the nouveau riche shopped at Amarsons or Benzer at Breach Candy,” recalls Shaina NC. The designer and politician inherited the space from her mother when she was 18.

A few steps around the corner, staring in the eye of the heavily-guarded Lion Gate edifice, stands the 30-year-old grande dame of Indian boutiques – Ensemble.

Managed by the stylish straight-shooter Tina Tahiliani-Parikh, the multi-designer, multi-city brand was founded by her brother and designer Tarun Tahiliani in 1987, along with his wife Sailaja, and co-designer and friend, the late Rohit Khosla.

The latest to join the hallowed circle is Zara. The Spanish retail giant is set to launch its flagship store at Flora Fountain (settled around the Kala Ghoda precinct) on May 2. And it’s making news for all the right (read: historical) reasons.

At a whopping annual rent of Rs 30 crore, it is reported that they have acquired a titanic-sized 50,000 sq. ft. carpet area, the largest by any international retailer recorded in the Indian high street market.

Historically, Zara has steadfastly stressed on heritage storytelling via its iconic outlets, be it Madrid, Paris, or New York. The strategy to mobilise fervent, positive emotions, and embed these emotions into the customer experience only supplements the co-creative process of meaning-and-making.

“It’s a very clever move by Zara. It has positioned itself on another level, making it difficult for its competition, H&M, to follow suit. It’s more about branding than commerce,” believes industry expert Sabina Chopra.

“Back then, I was consulting with Tarini Jindal of Muse (a multi-brand luxury and designer store), and I stumbled upon this deadbeat space that belonged to Madras Café, but had been non-operational for 10 years. In an instant, I knew it was a great space for Sabyasachi,” says Chopra.

A day-and-a-half is all it took for Mukherjee to conceptualise his first boutique in Mumbai, and he subsequently launched in 2010. The need for a bigger space propelled the boutique’s repositioning to its current Ador House residence in July 2014.

A pleasingly understated two-level luxury experience, the 8,500 sq. ft. expanse benefits from imposing historical finds, modern quirks like the Amul book, and the cluttered romance of Parsi and Bengali homes fraternising with the regimented structure of cantonment bungalows.

“The store’s interiors are plagiarised every other day with customers discreetly taking pictures on their smart phones, and copying its design,” Mukherjee had said in one of his earlier interviews.

“The feeling of permanence and history is strong in Kala Ghoda, and its rich and varied past blends well with the classical collection inspired by India’s rich heritage of textiles. Being the oldest fashion house in the country, it suits the location admirably,” says Ritu Kumar about Kala Ghoda.

Earlier, the brand occupied a standalone space at High Street Phoenix, Lower Parel, but soon migrated to Kala Ghoda in 2015. “The older address has been shifted to the Palladium mall, and Kala Ghoda is our new flagship,” adds the matriarch of Indian fashion.

“The neighbourhood is the only area that is truly heritage Bombay. It has pockets of interesting art galleries such as Jehangir and Chemould hobnobbing with British architecture. And the fact that it’s a semi-pedestrian zone lends to its energy and vibe,” says Nimish Shah, the designer behind the label Shift.

In July 2016, the young designer introduced Makeshift, a pop-up store at the “prestigious” space once engaged by Muse. Kala Ghoda and its neighbouring borough rank top on his wish list for a flagship store. “But my label doesn’t follow a traditional retail format entailing bridal wear. So the commerce behind running my own store would make it impossible to sustain,” he explains matter-of-factly.

Shah’s acute cognisance conveys the commerce of trousseau that’s inescapable in a discussion about Indian retail practice. Gaurav Gupta, who took over the coveted ground floor space vacated by Mukherjee, allegedly rents it for an astounding Rs 5 lakhs per month.

“The Sabyasachi store achieved what Muse failed to do – to entice customers to venture into Kala Ghoda. Sabyasachi was a destination people didn’t mind going out of their way for,” says Chopra, talking about the city’s high street retail quarter.

Until then, it was a commercial office zone that lost its fizz post 5 pm, and was mostly populated by satchel-carrying artists spilling over from the adjoining Jehangir Art Gallery.

The Kala Ghoda Café was another crowd-puller. In stark contrast to a blinding tungsten-lit, fast-paced chain-café experience, this sunbathed part-café, part-bakery, part-gallery subscribes to a stubbornly idyllic way of life promoted by traditional, pre-Mumbai Iranian cafes.

“They didn’t change the menu for a year, following the modern-day Parsi lineage; basically telling you, ‘we’ll teach you how to live life’. In fact, on Sundays, if a customer visits the café on a bicycle, they are entitled to free coffee,” adds Shah. An elitist approach perhaps, but the gesture disguised as a lesson in boosting community dynamics in a business model.

Nicobar, a lifestyle and fashion brand, found a comforting connect with the café’s concept, and invested in the top floor space of the building in March 2016.

“Kala Ghoda and its vicinity gained prominence because a cluster of designers with the bandwidth to go with larger spaces decided to move there. In effect, its residents are open to the idea of leasing out their spaces, leading to a drop in rentals,” says Chopra, about Mumbai’s most desirable address.

Shweta began writing on fashion when it wasn’t quite the opium of urban India. With a master's degree from London’s Central Saint Martins, she has previously worked as Fashion Features Editor with Grazia India, and authored a coffee table book titled Aharya, tracking the aesthetic attire at the Kumbh Mahaparv. Sh​weta​ is currently enjoying ​the liberating space of freelance​ writ​ing​ with beloved long black ​by her side.