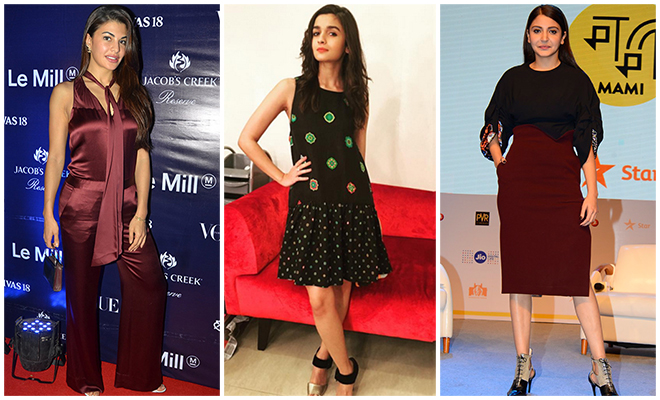 We totally approved the looks Bollywood celebs threw at us this week. From the desi vibes that Dia Mirza, Kalki Koechlin, Kajol, and Jacqueline Fernandez were giving, to our ever-so-beloved airport-style looks, this was quite evidently a fashionable week for our A-listers. Whilst, Prachi Desai, Shraddha Kapoor, and Kareena Kapoor Khan chose to go all black, we saw a lot of reds by Katrina Kaif, Sonakshi Sinha, and Neha Dhupia. Prints were also a hot-selling item this week, with Sonam Kapoor, Anushka Sharma, and Shraddha Kapoor sporting the trend.

Scroll down to know if your fave celebrity made it on this week’s style spots.

Jacqueline Fernandez in a Jade lehenga.

Prachi Desai in a Madison dress and Steve Madden heels.

Kajol in a Bhumika Sharma anarkali.

Aishwarya Rai Bachchan in a white shirt from The Bombay Shirt Company and Louboutin booties.

Kalki Koechlin in an Anavila saree.

Sonam Kapoor in a Masaba saree.

Anushka Sharma in a Dior ensemble.