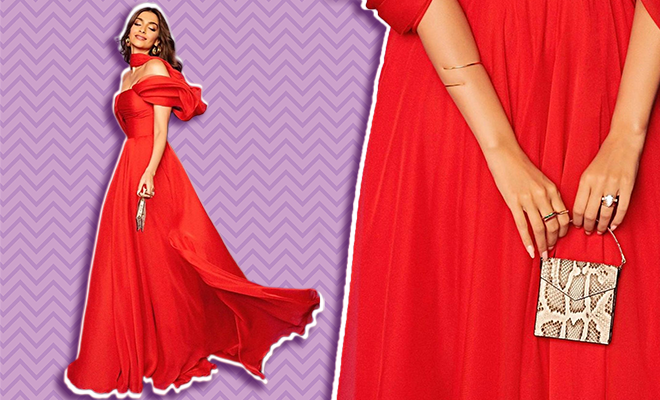 Sonam Kapoor Paired The Tiniest Bag With Her Custom Gown And We Might Know What’s In It!

There is no limit to the things that women can fit in their handbag. From chapsticks, mini perfumes to multiple protein bars, we really do go overboard with packing our “essentials” for the day. The loose safety pins and mints in our bags only see the light of day when we switch to a different bag. The fact that women take forever to find the exact thing they need from their bag is already a thing. But it seems like Bollywood’s favourite fashion girl Sonam Kapoor Ahuja might have a solution to this hoarding problem…switch to a smaller bag!

Alright, we have to come clean. We did get the idea of switching to a smaller bag from Sonam’s latest look. But the “smaller” bag that Sonam decided to use is the tiniest bag we have ever seen!

The actress kicked off  The Zoya Factor promotions in a custom Georges Hobeika haute couture red flared gown. The richly hued gown featured a detailed neck, full with drop sash sleeves and draped neck. At first, we thought it was a dupatta, the kind of style sorcery only Sonam can pull off. The gown also marks a fashion overlap between Sonam and Priyanka Chopra Jonas, who wore the label for her first-ever Cannes red carpet. Remember the white bridal gown she had on while eating a slice of pizza on the balcony? Yep, that’s it.

Going back to the bag, Sonam accessorised her look with dainty pieces, right down till the S’uvimol snake print bag. The bag comes with it’s own crossbody strap and that amuses us quite a bit! Because what you can possibly fit in this palm-sized bag? Well, given how bright and shiny Sonam’s eye makeup looks, we think she is carrying her favourite Givenchy ombre couture cream eyeshadow! The actress confessed to being obsessed with this little container of eye sheen, we won’t be surprised if she was carrying it “for emergencies”! And maybe 2 10 rupee coins because that’s all there’s space for.

Besides the obviously fab outfits Sonam has in line for the promotional junket, she revealed a sly detail about the theme of the same. The actress is going to stick to red for all of the looks. She said, “It was my idea to wear red at the promotions. I wanted to do full justice to the story and my role. I thought this was the best way to introduce viewers to the eccentricities of Zoya. ‘The Zoya Factor’ is about the titular character being considered a good luck charm for India’s cricket team at the World Cup. So why not go about the promotions the Zoya way? Also, red is considered an auspicious colour. We’re going the extra mile to make sure that luck is on our side too”. Interesting!

A shiny eyeshadow isn’t the only thing Sonam is obsessed with! Check out some of the other makeup faves of Sonam Kapoor’ Ahuja’s in her Vogue feature below!

ALSO READ: Sonam Kapoor Showed Us How To Do 90s Glam In This Tutorial And We Tell You How To Recreate It!

Amy Jackson’s Pregnancy Fashion Is All Sorts Of Goals. And This Topless Picture Of Her Will Make Your Jaw Drop!