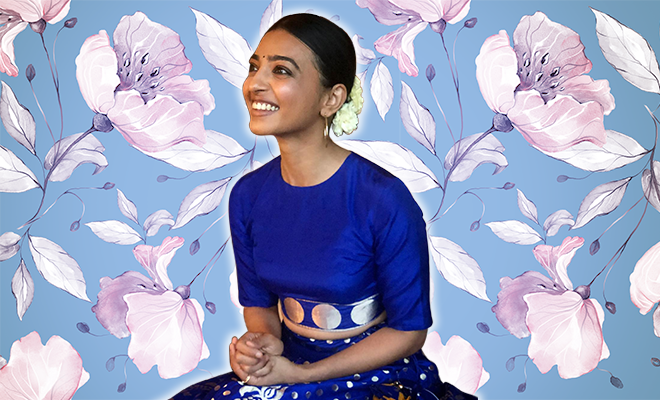 Radhika Apte’s Wedding Saree Was Her Grandmother’s Old Drape With Holes In Them. We Love How Wholesome This Is.

Fun Fact: The Indian wedding industry is the second-largest in the world, just behind the U.S. market, with a total value an estimated $50 billion.

It comes as no surprise that weddings are such a lucrative industry in India. Our purchasing power is growing and the last few years has seen BIG Bollywood weddings. All of which have blown up on social media. While destination weddings and royal venues are a big part of the budget, designer lehengas and sarees have taken a front seat as well. Having said that, the millennial bride has managed to strike a balance between Insta-aesthetic and tradition. Deepika Padukone wore her mother’s saree for her wedding ceremony, a practice held dear by Indian brides. I myself, plan on doing the same, and fortunately, my mother has saved her blue Banarasi saree all these years for me. This, in addition to the Sabyasachi lehenga, I one day hope to at least be able to rent, for one of the ceremonies!

But one Bollywood starl who went beyond the balance and kept it totally fuss-free is Radhika Apte. This powerhouse performer is the October cover star for Femina and revealed very wholesome details about her big day in the feature.

Radhika did not have the Big Fat Indian Wedding. The extremely private actress rarely reveals details of her personal life. Most might not even know she has been married for 7 years now! Talking about her shaadi style, she revealed,”When I got married, I wore my grandmother’s old sari for my registered wedding and it had a lot of holes in it. But I wore it because she’s one of my favourite people on the planet. I’m not really someone who spends a lot of money on fancy clothes and especially not for a registered marriage. Of course, I wanted to look good—I did buy a dress for my party (which was less than ten thousand rupees!). Also, I have to tell you this; I bought that dress at the last minute because I forgot to buy one! I’m not a picky person when it comes to clothes”, Radhika elaborated. How sweet!

It is indeed a modern story of love for Radhika and husband Benedict Taylor. The duo are in a long distance marriage, a reality that many millennial couples live with today. Talking about the same, Radhika revealed in a different interview, “Benedict and I met eight years ago through common friends. But to date, not many people know that I’m married. It wasn’t like I wanted to keep things ‘under wraps’ as many may think. It’s just that we got married and didn’t make a big deal out of it. It was a registered marriage. But honestly, marriage or no marriage, it doesn’t really matter to me, because commitment is commitment. If two people want to be together, they will be, irrespective of whether they’re married or not. In our case, we are both from different countries, and marriage suited us because it gave us entry to each other’s countries”, she confessed.

It is fascinating to read Radhika’s take on her unconventional marriage, check it out here!

P.S. Radhika also got very real about wedding fashion in her interview. She confessed, “It doesn’t matter whether it’s traditional or modern look as long as it’s light, breezy and comfortable… I can’t imagine having bruises on my body when I take off my clothes!”. We agree, girl!