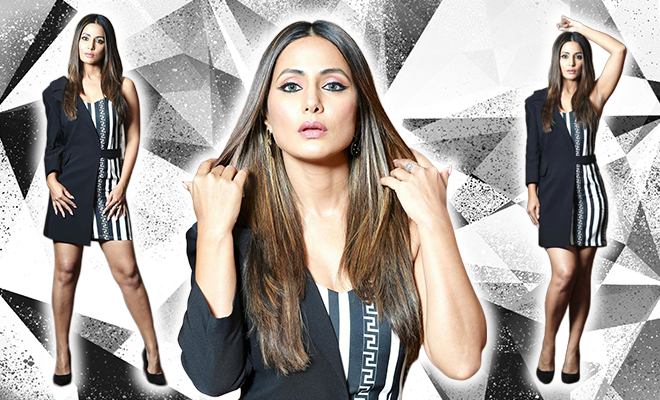 You know, they say there are two sides to every coin. Two sides two a story. And now, it looks like there are two sides to Hina Khan. And we aren’t talking about just her roles. Yes, she seems like a star in real life and plays a negative character on the show Kasautii Zindagi Ki, but that’s not the kind of versatility we are talking about. Recently, Hina Khan was spotted in an outfit – an all black and white number, which if she committed a crime in (not implying that she would), would throw off eye witnesses completely. Because if you looked at her from one side, you would think she was headed to a club in a casual, strappy number. From the other side, you would think she’s going to take over a boardroom. And you would be right on both accounts.

She wore this outfit with a small pair of gold and black earrings and a fabulously sexy black stilettos. She looks very inch the star in this look and we love how effortlessly put together she looks. She complemented this outfit with a strong black eyeliner that brought out her eyes, while the rest of the look was matte. She added a shine with a hint of colour on the lips.

But what had me intrigued was the dress itself. To pull off something that’s tricky, like this outfit, takes some major confidence, which Hina Khan has plenty of. Her captions though, don’t give away anything. So we don’t know who the designer is, or where she was when she got this shoot done but man, we would recreate this in a heartbeat.

If you were hoping to see her on screen soon, you will have to wait, she’s not returning to TV for a while and her movie projects are still being shot. About TV, she said, “The actress said, “Currently, I am busy with my movie projects and I don’t think that I will be a part of the show anytime soon. But, you never know what the future has in store for you.”

Zareen Khan Gets Candid About Body Shaming And The Horrors Of The Casting Couch. We Are So Enraged