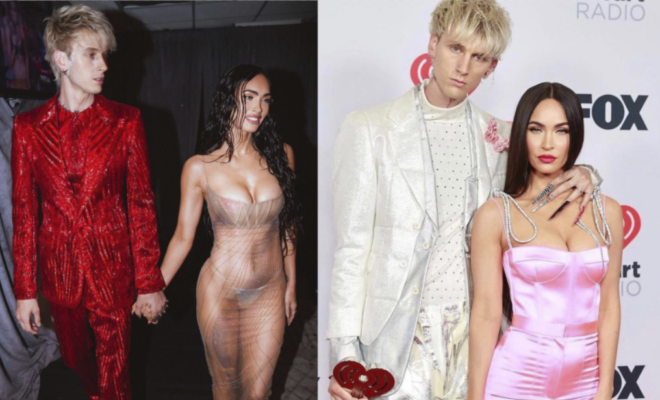 Megan Fox and Machine Gun Kelly have always made sure to put their fashionable best forward. Twinning and shimmering at every possible event, the couple that is now officially engaged, is always on point, with Machine Gun Kelly, the guy in this case visibly taking the effort to experiment (which I appreciate). While, the two never fail to stand out, with their sassy and undeniably sexy co-ordinated clothing, I love their take on couple fashion, which I guess hardly any celebrity has ever mastered like them. An appreciation post for the lovebirds and their stunning closet, here’s a list of our favourites.

Pink With A Twist

Making pink look wild, Megan Fox and Machine Gun Kelly attended the iHeart Music Awards, with the former dressed in a bubble gum pink satin Mach & Mach jumpsuit, with silver tie-up detail, the latter opted for a Comme des Garçons ensemble, featuring a metallic blazer, layered over a turtle neck and Bermuda shorts in the same fabric. Loaning the shade pink from his lady love dressed in one, the 31-year-old musician added a butterfly brooch to his blazer and white crew socks with pink stripes (his long bedazzled nails caught my attention).

The Too Hawt To handle Look

Walking the red carpet for MTV VMAs, the couple appeared in a jaw-dropping look. Megan dived into her goddess best, in a champagne coloured sheer Mugler dress, with intricate silver and pink lines running throughout the bodice, she managed to impress the internet with her all wet-look (it pretty much drew inspiration from Kim Kardashian’s 2019 Met Gala look). While Machine Gun Kelly opted for a rather striking, solid colour, and donned an electric crimson Dolce & Gabbana glitter suit.

Ready For The Met

While the couple didn’t make it to the 2021 Met Gala together, their post gala appearance still stole the limelight. Dressed in a sequin laden, asymmetrical Dundas x Revolve mini dress, Megan styled the look with her her choppy bangs, and a long braid, and Kelly twinned with his lady love in a black, leather snakeskin jacket, embellished with red patch details, a sheer ganjee and a pair of black leather pants.

ALSO READ: Megan Fox And Machine Gun Kelly Get Engaged In The Most Romantic Way Possible. Check Out That Ring!

The couple twinned in shimmery attires post their grand appearance at the VMAs last year. While Megan settled for a Dolce & Gabbana silver cut-out mini dress, a clutch and metallic heels, Kelly too looked hot in the very peri ensemble, that featured a sequinned Valentino shirt, calling for attention. Giving a brief break to their much-gothic signature style, it was one of the first times that Kelly opted for a lovely shade of mauve.

A post shared by Blossom and Sky Byron Bay (@blossomandsky_)

Making A Statement In Black

Black surely makes a rare and unlikely appearance in the couple’s OTT closet. Opting for the shade, the two looked flaming hot, as they walked the red carpet for the 2021 Billboard Music Awards. A silhouette that shared similarities with her Mugler dress at last year’s VMAs, Megan opted for the sheer cut-out number from the same label, while Kelly experimented with the signature black suit and wore a Balmain ensemble featuring a long white shirt, an asymmetrical blazer and bell-bottom trousers. They make even the simplest outfit look avant-garde (I mean how?).