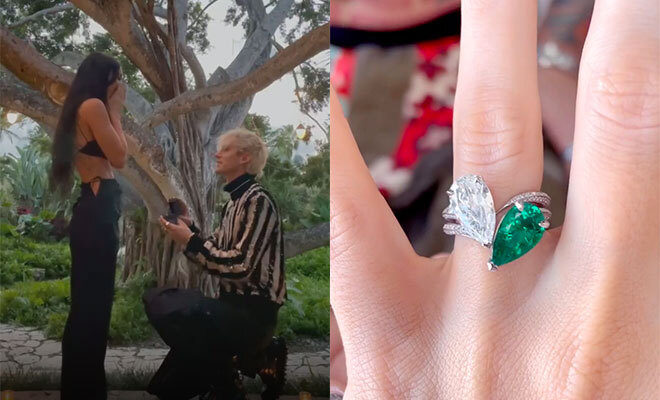 Megan Fox And Machine Gun Kelly Get Engaged In The Most Romantic Way Possible. Check Out That Ring!

No matter how open-minded we are in our day-to-day life, there are certain moments we can’t help but be judgemental. That happens with celeb couples the most, I think. But I do feel that due to being in the public eye constantly, the speculations about them are harder. It is a shame because people clearly wait for them to split and discuss it which is so disrespectful to the couple. One such couple is Megan Fox and Machine Gun Kelly. However, they have proved all the haters wrong and gotten engaged recently!

Actor Megan Fox and rapper Machine Gun Kelly got engaged and have taken to their respective Instagram accounts to show it to their fans. The video posted by Megan shows them atop some stairs in a beautiful location under the branches of a banyan tree with Machine Gun Kelly kneeling before her and asking her to marry him. How romantic! She captioned the video saying,”In July of 2020 we sat under this banyan tree. We asked for magic. We were oblivious to the pain we would face together in such a short, frenetic period of time. Unaware of the work and sacrifices the relationship would require from us but intoxicated off of the love. And the karma. Somehow a year and a half later, having walked through hell together, and having laughed more than I ever imagined possible, he asked me to marry him. And just as in every lifetime before this one, and as in every lifetime that will follow it, I said yes …and then we drank each other’s blood. 1.11.22” Some Instagram users have taken the last line about drinking blood way too seriously but that’s beside that point.

Machine Gun Kelly posted a close up of the engagement ring which is a blend of two rings. One of the stones is an emerald which is Megan Fox’s birthstone and the other is a diamond which is Machine Gun Kelly’s birthstone. So thoughtful! He wrote, “‘yes, in this life and every life’  beneath the same branches we fell in love under, I brought her back to ask her to marry me. I know tradition is one ring, but I designed it with Stephen Webster to be two: the emerald (her birthstone) and the diamond (my birthstone) set on two magnetic bands of thorns that draw together as two halves of the same soul forming the obscure heart that is our love. 1-11-2022 “

The couple looked so adorable and happy together but I cannot help but fawn over them. Despite all the speculations about their relationship, I am glad that Megan Fox and Machine Gun Kelly did what their heart desired. I wish them a lifetime of happiness!

Alia Bhatt Casually Flaunts ‘Boyfriend’ Ranbir Kapoor’s Photography Skills And We Wish To Have One Just Like Him!